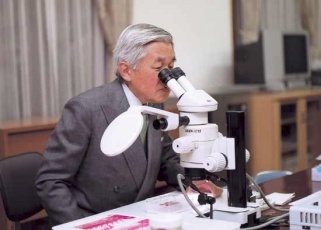 For many years, the Emperor has made a taxonomic study of gobies, small fish found in fresh, brackish and marine waters. As a member of the Ichthyological Society of Japan, He published 30 papers in the society’s journal between 1963 and 1989. He was one of the contributors to The Fishes of the Japanese Archipelago (1st edition in 1984), the first illustrated book of all the fishes in Japanese waters. He served as honorary president of the Second International Conference on Indo-Pacific Fishes in 1985, and presented a paper, “Some Morphological Characters Considered to be Important in Gobiid Phylogeny,” which was later included in the conference proceedings.

Despite His heavy official duties, the Emperor published two papers in a joint work in 2000. His Majesty also became one of the co-authors of Fishes of Japan with Pictorial Keys to the Species, Third Edition published in 2013. The Second edition of the book was also published in English.

For His work in this field, His Majesty was invited to become a foreign member of the Linnean Society of London in 1980 and was elected as an honorary member of that Society in 1986. He has been an honorary member of the Zoological Society of London since 1992 and of the Research Institute for Natural Science of Argentina since 1997. He is also a research associate of the Australian Museum. In 1998, He became the first recipient of the King Charles the Second Medal, which is awarded by the Royal Society of London to those heads of state who have made outstanding contribution to the advancement of science.

The Emperor has a keen interest in both Japanese and world history. At the request of the editor of the journal Science when it published a special issue on Japan in 1992, He contributed an essay “Early Cultivators of Science in Japan,” relating the history of early science in Japan after the arrival of the Europeans.

The Emperor takes a keen interest in natural life and its conservation. He initiated a research project, involving more than 100 scientists, to compile accurate data on plants, trees and animals in the Imperial Palace Grounds including the Fukiage Garden, usually not open to the public. He also decided to open in May 2007 part of this garden to groups of adults and children for the first time in order to share the beauty of its nature with the people.