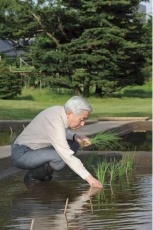 Emperor Akihito carries out
the symbolic planting of rice
in the Imperial Palace Grounds.
(May 2011) 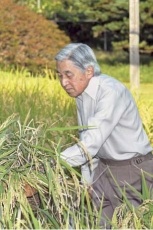 Every year, following the example of His father, Emperor Showa, who initiated the practice in 1927, the Emperor Himself plants and harvests rice, the traditional main crop in Japan, in the paddy-field in the Palace Grounds.

The Empress raises silkworms at the Palace sericulture centre, with the help of several staff members. She feeds the silkworms with mulberry leaves, following the precedent set in 1871 by Empress Dowager Sho－ken, Empress and consort of Emperor Meiji, the great-grandfather of His Majesty. Every spring, the Empress tends 120,000 to 130,000 silkworms during almost more than two months and harvests some 150kg of cocoons in the beginning of summer. Some of the silk produced is used for the restoration of old textile material of historical value kept by the Imperial Family at the Shosoin Repository in Nara since the 8th century, when it was the capital of the country. 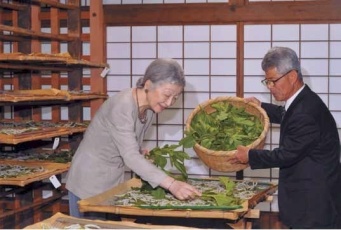 Empress Michiko feeds mulberry leaves to silkworms at the sericulture centre
in the Imperial Palace Grounds. (May 2013) Besides attending the symbolic rituals
related to silkworm raising, She often visits the mulberry field and the cocoonery
and works with the staff, tending the worms until they make their cocoons,
which are then readied for sending to the silk mill.

On certain days of the year determined by tradition, Their Majesties pay Their respects to the Imperial ancestors at the Palace Sanctuary, and pray for the happiness and welfare of the people.