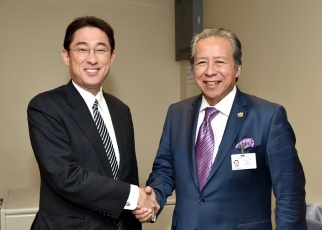 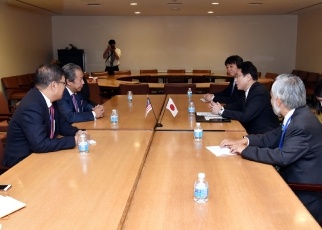 On July 28, commencing at around 12:40 p.m. (New York time) for approximately 15 minutes, Mr. Fumio Kishida, Minister for Foreign Affairs, who is visiting the United States of America (New York), held a meeting with Y.B. Dato' Sri Anifah Bin Haji Aman, Minister of Foreign Affairs of Malaysia. The overview of the meeting is as follows.

1 In his opening remarks, Minister Kishida stated that he would like to cooperate with Malaysia, which together with Japan serves as a United Nations Security Council (UNSC) member representing the Asia region and is also Japan's strategic partner, especially for regional stability and peaceful resolution of problems in the region.

2 The two ministers also exchanged views on topics such as issues in the South China Sea and the situation in North Korea, and shared the view that they would continue to work closely together on challenges facing the region and the international community.