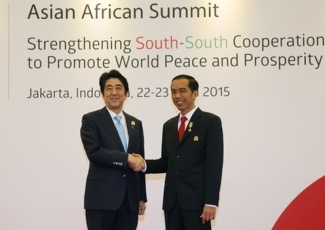 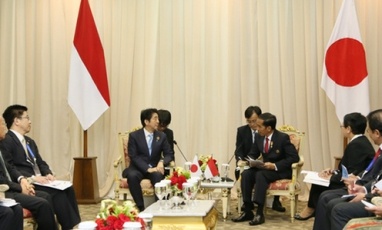 On April 22, commencing at around 1:45 p.m. (local time) for approximately 30 minutes, H.E. Mr. Shinzo Abe, Prime Minister of Japan, who was on a visit to Jakarta, Indonesia to attend the 60th Asian-African Conference Commemoration, held a Japan-Indonesia Summit Meeting with H.E. Mr. Joko Widodo, President of the Republic of Indonesia. An overview of the meeting is as follows. After the meeting, the “Indonesia-Japan Joint Press Release on Promotion of Triangular Cooperation for Africa (PDF)

In his opening remarks, President Joko Widodo said he was happy to meet with Prime Minister Abe again after his visit to Japan last month and thanked him for attending the 60th Asian-African Conference Commemoration. Prime Minister Abe expressed his respect to President Joko Widodo for the leadership he has demonstrated to hold the Conference and pledged his cooperation toward its success.

(1) President Joko Widodo expressed strong expectations regarding investment in Indonesia of which Japanese companies expressed their intentions during his visit to Japan last month. He also expressed his hopes for Japan’s cooperation on projects concerning the construction of the urban Mass Rapid Transit (MRT) system and the power station in Central Java, as well as realizing cooperation in the maritime field through the Maritime Forum.

(2) Prime Minister Abe said that President Joko Widodo’s visit to Japan last month produced a large number of outcomes, including in maritime and economic fields, and that he wanted both countries to follow-up on these outcomes in order to further strengthen their “strategic partnership.” He said he hoped that the “PROMOSI” initiative that they agreed on at the last summit meeting would lead to increased investment and export promotion; that Japan would cooperate in infrastructure projects in Indonesia including the construction of a new port in the Metropolitan area, and would support investment by Japanese companies; that it would cooperate toward the early realization of the high speed railway project; and that he wanted to deepen cooperation and discussions in fields such as energy, mining, and electric power. In response, President Joko Widodo said that he agreed with the promotion of investment through the “PROMOSI” initiative.

(3) Prime Minister Abe also stated that he wanted to advance realization of cooperation in the maritime field through the Maritime Forum and that he wanted to progress preparations for the Japan-Indonesia Joint Foreign and Defense Ministerial Consultations and thereby deepen cooperation in security and defence area. He also welcomed Indonesia’s decision to exempt Japanese citizens from visa requirements and said he hoped this measure would come into effect at an early stage. President Joko Widodo described again the policies to realize cooperation in these respective fields, and both leaders agreed to steadily follow-up on the outcomes achieved by the President’s visit to Japan.

(1) Both leaders exchanged opinions on regional and international issues. Prime Minister Abe said he emphasized cooperation specifically with Indonesia in maritime field including issues of the South China Sea and conveyed his expectation for Indonesia’s active engagement in this field . In response, President Joko Widodo stated that Indonesia would play its role.

(2) Prime Minister Abe said he wanted to cooperate with Indonesia in order to address the issues in international community, and in terms of specific cooperation, he was delighted that they had reached an agreement this time on promoting triangular cooperation for Africa. He also stated that he wanted to cooperate closely with Indonesia on the United Nations Security Council reform, and that in order to convey to the world the threat of tsunamis and the countermeasures being taken, Japan had considered a proposal for the United Nations to establish the “World Tsunami Day” and that he hoped for Indonesia's support for it. In response, President Joko Widodo said he agreed with Japan’s proposal, as the leader of a country which also suffered from tsunami damage.