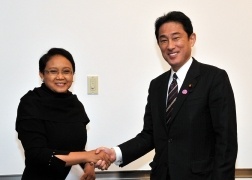 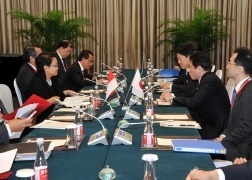 On November 8 (Saturday), commencing at 10:30 a.m. (local time) for approximately 40 minutes, Mr. Fumio Kishida, Minister for Foreign Affairs, held a Japan-Indonesia foreign ministers’ meeting with Ms. Retno Marsudi, Minister of Foreign Affairs of the Republic of Indonesia, in Beijing, the People’s Republic of China, where he was visiting to attend the APEC Ministerial Meeting. An overview of the meeting is as follows:

(1) Strengthening strategic partnership
Minister Kishida congratulated Ms. Retno on her assignmentas the foreign minister and stated that the two countries have been longstanding heart-to-heart friends and have also been important partners economically. Minister Kishida also stated that Japan would like to closely cooperate with Indonesia as maritime nations respectively. In response to this, Minister Retno also expressed her intention to strengthen cooperation and the two ministers shared the view that they will further strengthen the strategic partnership including continuation of foreign ministers' strategic dialogue.
(2) Cooperation in the maritime field
Minister Kishida stated that for the peace and prosperity of the region, a free, peaceful and open ocean is crucial and suggested promotion of cooperation in the maritime field. In response, Minister Retno expressed her assent stating that the new Indonesian government emphasizes the maritime field and would welcome any possibility of cooperation and the two ministers shared the view that they will cooperate on the maritime field.
(3) Security cooperation
Minister Kishida gave an explanation on Japan's idea to more proactively contribute to peace and stability of regional and international society from the perspective of the ''proactive contribution to peace'' based on international cooperation. Minister Retno stated that peace and stability are the basis of economic development and therefore she would cooperate with Japan.
(4) Strengthening mutually beneficial economic relationship
Minister Kishida stated that he emphasized the preparation of investment environment in order to further deepen the win-win economic relationship between the two countries and added that he would support such preparation through cooperation of high-quality infrastructure preparation such as the Metropolitan Priority Areas for Investment and Industry (MPA) in the JABODETABEK Area. Minister Retno gave an explanation on the infrastructure preparation plan under the new government and expressed her expectation toward cooperation for the plan.

Concerning the issues surrounding the South China Sea, Minister Kishida gave an explanation on the position of the Government of Japan that the ''rule of law'' is important. Regarding the issue of the South China Sea, Minister Retno gave an explanation that the Government of Indonesia would fulfill the role of an ''honest broker'' in this issue.