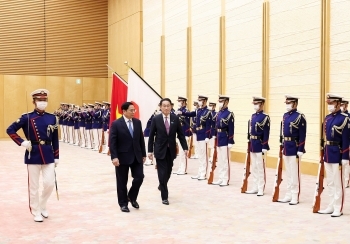 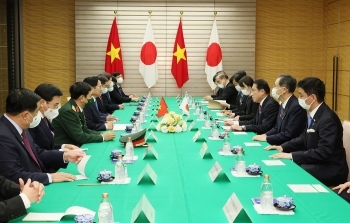 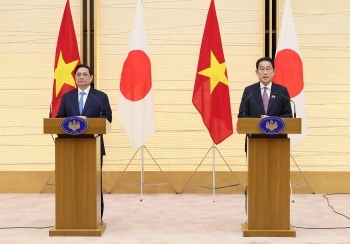 On November 24, commencing at 6:15 p.m. for approximately 45 minutes, Mr. KISHIDA Fumio, Prime Minister of Japan, held a summit meeting at the Prime Minister's Office of Japan with H.E. Mr. PHAM Minh Chinh, Prime Minister of the Socialist Republic of Viet Nam, who is visiting Japan as a Guest on an official working visit. An overview of the meeting is as follows. The meeting was attended by Mr. ISOZAKI Yoshihiko, Deputy Chief Cabinet Secretary and others.
The two leaders issued a joint statement, witnessed the exchange of documents, and gave a joint press release. After the joint press release, a dinner was hosted by Prime Minister Kishida.

Prime Minister Kishida stated to Prime Minister Chinh that he would like Viet Nam to be the center of economic revitalization in the post COVID-19 world to increase investment by Japanese companies. Prime Minister Chinh stated that he would take the initiative by himself in improving the investment environment to attract more Japanese companies.
In addition, Prime Minister Kishida described the launch of the DX Initiative between Japan and Viet Nam, the Supply Chain Diversification Initiative, and the Technological Innovation Cooperation Partnership towards the economic revitalization in the post-COVID-19 world.

Prime Minister Kishida stated that Vietnamese human resources are an important part of the Japanese economy. The two leaders shared the view on strengthening communications between the Vietnamese and Japanese authorities, and in building a system for proper operation of the technical intern training system to improve environment surrounding Vietnamese technical intern trainees.
Prime Minister Kishida also welcomed the signing of the Mutual Legal Assistance Treaty between Japan and Viet Nam and expressed his expectation that this treaty would advance cooperation between the two countries regarding crime control. In response, Prime Minister Chinh pointed out the significant role played by Vietnamese people in Japanese society, and expressed his gratitude to the Government of Japan and the Japanese people for their support to Vietnamese people in Japan under the COVID-19 pandemic.

(4) Cooperation on Common Issues of the International Community

Prime Minister Kishida expressed his respect for Viet Nam's ambition to achieve carbon neutrality by 2050 at the 26th Session of the Conference of the Parties to the United Nations (UN) Framework Convention on Climate Change (COP26). He stated that Japan would provide maximum support through energy transition efforts toward carbon neutrality in Viet Nam. In addition, Prime Minister Kishida welcomed Viet Nam’s decision to join the Southeast Asia Disaster Risk Insurance Facility (SEADRIF), which is an ASEAN Plus Three framework that strengthens financial resilience against natural disasters, and informed Prime Minster Chinh of the decision to provide a loan of 17.8 billion yen to improve firefighting and rescue capabilities.
In response, Prime Minister Chinh stated that he would like to strengthen cooperation with Japan on common issues of the international community, such as climate change and disaster prevention. He expressed his gratitude and expectations for the support from Japan. The two leaders also shared the view to cooperate toward the realization of a world free of nuclear weapons.

Prime Minister Kishida welcomed the progress of cooperation between the defense authorities of both countries for the peace and stability in the region and in the international community under the Japan-Viet Nam bilateral defense cooperation at a new period. He stated that Japan would accelerate discussions to implement concrete equipment transfers, including ships, under the Agreement between the Government of Japan and the Government of the Socialist Republic of Viet Nam concerning the Transfer of Defense Equipment and Technology,. There would be further cooperation on preparations for Viet Nam's Peacekeeping Operations (PKO), cybersecurity, and in the hygiene field between defense authorities. Prime Minister Kishida also stated that he would continue to support improvements in Viet Nam's maritime security capabilities, including the provision of maritime searches, rescue equipment, and patrol vessels.
In response, Prime Minister Chinh stated that defense cooperation between Japan and Viet Nam has advanced rapidly in recent years, and that he would like to continue to strengthen cooperation with Japan.

(6) 50th Anniversary of the Establishment of Diplomatic Relations

Prime Minister Kishida stated that he would like to set up a joint public-private 50th anniversary executive committee next spring toward the 50th anniversary of the establishment of diplomatic relations between Japan and Viet Nam in 2023. Prime Minister Chinh stated that he would fully cooperate as the leader of the Vietnamese government. The two Prime Ministers shared the view to work together to mark 2023 as a milestone in opening a new era for Japan and Viet Nam.

(2) The two leaders affirmed cooperation on maintaining the high standards of Trans-Pacific Partnership (TPP11 Agreement) and in ensuring the full implementation of the Regional Comprehensive Economic Partnership (RCEP) Agreement.