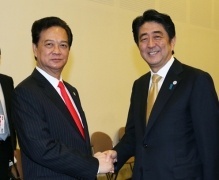 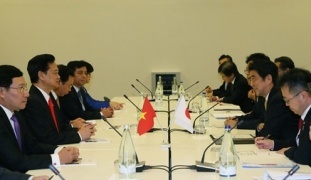 Photo: Cabinet Public Relations Office
On Thursday, October 16, commencing at 9:50 a.m. (local time) for approximately 20 minutes, Prime Minister Shinzo Abe, who is on his visit to Milan, Italy to attend the Asia-Europe Meeting (ASEM) 10 Summit Meeting, held a meeting with H.E. Mr. Nguyen Tan Dung, Prime Minister of the Socialist Republic of Viet Nam. An overview is as follows.
1. At the beginning, Prime Minister Abe said that the relationship between the two countries has been deepening dramatically, and he wants to promote cooperation in a wide range of fields under the "Extensive Strategic Partnership." Prime Minister Dung replied that Viet Nam is hoping to work with Japan and keep cooperating in various fields such as economics, politics, diplomacy, culture, science and technology, education, and national defense and security. He also expressed gratitude for Japan's ODA contributions to Viet Nam.
2. Additionally, Prime Minister Dung said he welcomes Japan's efforts to maintain peace and stability in the region, and Japan's "proactive contribution to peace" policy. Prime Minister Abe said Japan is hoping to jointly contribute to regional peace and stability, including maritime security, and he mentioned that in addition to the provision of six used vessels that was decided recently, Japan will continue to discuss about the provision of new patrol vessels.
3. Prime Minister Abe said he hopes to continue to coordinate on "the rule of law at sea," and both sides confirmed ongoing and close coordination on the South China Sea issue.