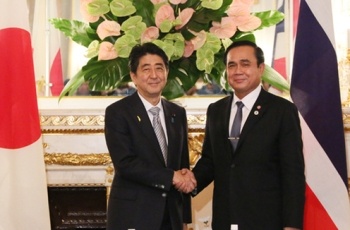 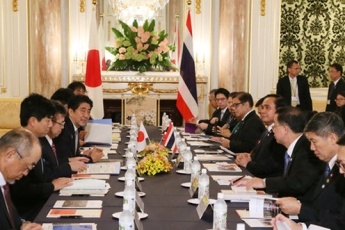 On July 4, commencing at 3:05 p.m. for approximately 40 minutes, Mr. Shinzo Abe, Prime Minister of Japan, held a meeting with H.E. Mr. Prayut Chan-o-cha, Prime Minister of the Kingdom of Thailand, visiting Japan to attend the Seventh Mekong-Japan Summit Meeting. The outline of the meeting is as follows.

At the beginning, Prime Minister Abe welcomed Prime Minister Prayut’s third visit to Japan—the first since his visit in March this year—and stated that he is happy Japan-Thailand relations have been developing under a “Strategic Partnership,” which has been supported by deep friendship and wide-ranging exchanges. He also commented that many Japanese companies are active in Thailand, and requested continued cooperation with regard to the development of the investment environment there. In response, Prime Minister Prayut stated that he is glad to see Prime Minister Abe again. He expressed his congratulations on the success of the Seventh Mekong-Japan Summit Meeting, and stated that he hopes to move forward with further cooperation.

Prime Minister Abe explained that he is promoting the policy of “Proactive Contribution to Peace” , which is based on the principle of international cooperation and has been receiving support from Prime Minister Prayut, and that the “Legislation for Peace and Security” is a part of this policy. He also pointed out that the two countries have been cooperating closely in areas such as politico-military dialogue between foreign affairs and defense authorities, and the participation of the Japan Self-Defense Forces in multinational training exercises.

Prime Minister Abe added that he strongly hopes for the formulation of a new constitution and the restoration of democracy in Thailand in line with its Road Map. In response, Prime Minister Prayut stated that Thailand is currently moving ahead with formulating a new constitution in accordance with its Road Map, and that the government intends to do its utmost so that elections are held before the end of next year and a fully democratic system is restored at an early date.

Prime Minister Abe commented that he intends to assist with Thailand’s goals, such as adding value to its industries, and that he would like Thailand, as an ASEAN nation, to communicate that public financial support is needed for highly efficient coal-fired power generation. In response, Prime Minister Prayut stated that he intends to promptly move forward with realizing cooperative initiatives related to infrastructure development and SEZs (special economic zones) in Thailand, and once again expressed his hope for cooperation with Japan.

Prime Minister Abe also conveyed that Japan will further enhance regional connectivity through the “Partnership for Quality Infrastructure.” Prime Minister Prayut responded by stating that he will endorse the Government of Japan’s approach to supporting “quality infrastructure,” and hopes that the construction of a high-speed railway will start at an early date.

In addition, Prime Minister Abe welcomed the signing of a memorandum concerning the development of a high-speed railway between Bangkok and Chiang Mai utilizing shinkansen (bullet train) technologies and railway cooperation related to the Southern Economic Corridor, as well as the settlement of price negotiations between Japanese companies and Thai authorities in relation to the Red Line urban railway system. The two leaders also agreed on further cooperation based on the signing of a tripartite memorandum on the Dawei development.

The two leaders welcomed that, at a Japan-Thailand foreign ministers’ meeting held before this summit meeting, the foreign ministers of their countries agreed to prepare documents in order to promote cooperation in the field of agriculture, and to start holding dialogues related to this field on a regular basis. Prime Minister Prayut ended the meeting by congratulating Nadeshiko Japan, the Japan women’s national football team, on advancing to the World Cup final, and expressed his hope that the team will win the competition for the second time in a row.