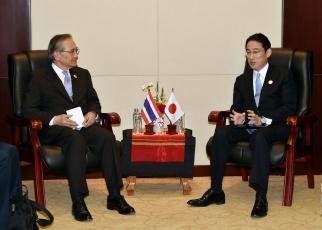 1 Minister Kishida expressed his gratitude once again in his opening remarks, for the warm reception he received on his much-desired visit to Thailand in May and commented that he hoped to continue working together with Minister Don to advance relations between the two countries. In response, Minister Don voiced his hope for Minister Kishida's satisfaction with his visit to Thailand and commented that the policy speech regarding enhanced connectivity given by Minister Kishida at Chulalongkorn University at that time had a major impact. He also noted that Thailand and its neighboring countries have been discussing the possibility of trilateral cooperation with Japan since this speech.

2 Minister Kishida conveyed that Japan had approved a grant of roughly 170 billion yen for the Mass Transit System Project in Bangkok (Red Line) (III) and that he hoped that it would help ease traffic congestion and reduce air pollution, and Minister Don expressed his gratitude.

3 Minister Kishida expressed expectations for the national referendum on the draft of the new Constitution taking place on August 7 as an important step toward the restoration of a civilian government in Thailand.

4 The two Ministers exchanged frank views on regional and international issues including the South China Sea situation and the North Korea problem.