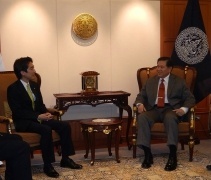 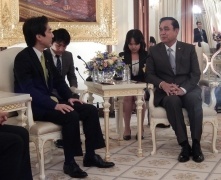 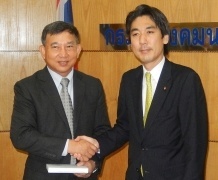 1. State Minister for Foreign Affairs H.E. Mr. Minoru Kiuchi visited Bangkok, the Kingdom of Thailand, on Wednesday, October 1 and Thursday, October 2, and made courtesy calls on Prime Minister H.E. Mr. Prayuth Chan-o-cha, Deputy Prime Minister and Minister for Foreign Affairs H.E. Mr. Tanasak Patimapragorn, and Minister of Transport H.E. Mr. Prajin Juntong, and held a meeting with Deputy Minister for Foreign Affairs H.E. Mr. Don Pramudwinai.
2. This was the first bilateral visit at the ministerial level of the Ministry of Foreign Affairs since the launch of the new administration in Thailand, and State Minister Kiuchi explained that  Japan would like to further strengthen the bilateral relations and expressed his expectation that Thailand will move democratization forward in line with the "roadmap" on restoring democracy.
3. Additionally, State Minister Kiuchi once again requested to ensure an investment environment to Japanese companies,  to utilize Japan's technologies for infrastructure projects in Thailand,  to lift restrictions on food imports imposed after the Great East Japan Earthquake in connection with radioactive materials promptly. State Minister Kiuchi also exchanged views on regional affairs, including strenghtening the relationship of cooperation in the ASEAN.
4. In response, the Thai side stated that they would like to move  forward with democratization steadily referring to  the experiences of foreign countries, including Japan. The Thai side also expressed their intention  promote an investment environment that is fair and transparent to Japanese companies  and  to strengthen the cooperative relationship in the economic field, including  infrastructure , and to direct that restrictions on food imports to be steadily lifted where possible.