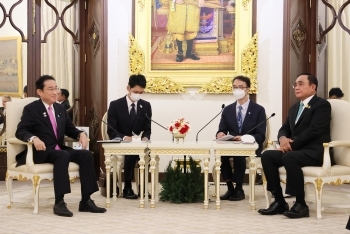 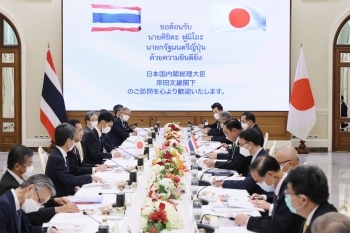 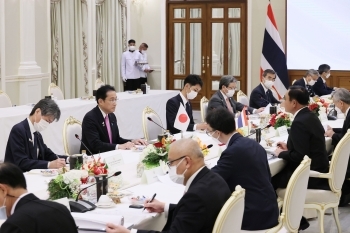 On May 2, commencing at 4:10 p.m. (local time; 6:10 p.m. JST) for approximately 2 hour and 15 minutes, Mr. KISHIDA Fumio, Prime Minister of Japan, who is visiting the Kingdom of Thailand, held a summit meeting including a small-group summit meeting with H.E. Mr. Prayut Chan-o-cha, Prime Minister and Minister of Defense of the Kingdom of Thailand, at the Office of the Prime Minister. An overview of the meeting is as follows. After the meeting, the two leaders attended a signing ceremony, joint press conference, and welcome dinner hosted by Prime Minister Prayut.
The meeting was attended by Mr. ISOZAKI Yoshihiko, Deputy Chief Cabinet Secretary and others.

Prime Minister Kishida expressed his gratitude to Prime Minister Prayut and the Thai people for their warm welcome. He stated that as the world currently stands at a historical crossroads over the foundations of the international order, he hoped to strengthen cooperation with Thailand in realizing a "Free and Open Indo-Pacific," and in addressing regional and international affairs, such as Russia's aggression against Ukraine and the situations in the South China Sea and in Myanmar. He also expressed his willingness to further develop friendly relations with Thailand, a strategic partner, on the occasion of the 135th anniversary of diplomatic relations between Japan and Thailand this year. In response, Prime Minister Prayut stated that he welcomes Prime Minister Kishida’s visit to Thailand, and that he would like to further strengthen bilateral relations and work closely together to address regional and international issues as the world faces the various challenges.


(Reference) Signed Agreements and Other