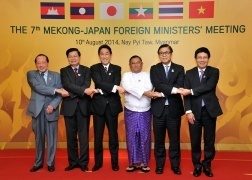 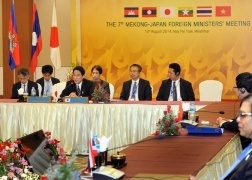 On August 10, commencing at 6:50 p.m. (local time) for approximately 35 minutes, the Seventh Mekong-Japan Foreign Ministers’ Meeting was held in Nay Pyi Taw, the Republic of the Union of Myanmar, and Minister for Foreign Affairs of Japan, Fumio Kishida  chaired this meeting. The overview of the meeting is as follows. (The attendees from countries in the Mekong region consisted of H.E. Mr. Hor Namhong, Deputy Prime Minister and Minister of Foreign Affairs and International Cooperation of the Kingdom of Cambodia, H.E. Mr. Thongloun Sisoulith, Deputy Prime Minister and Minister of Foreign Affairs of the Lao People’s Democratic Republic, H.E. Mr. Wunna Maung Lwin, Union Minister for Foreign Affairs of the Republic of the Union of Myanmar, H.E. Mr. Sihasak Phuangketkeow, Permanent Secretary, Acting for the Ministry of Foreign Affairs of the Kingdom of Thailand, and H.E. Mr. Pham Binh Minh, Deputy Prime Minister and Minister of Foreign Affairs of the Socialist Republic of Viet Nam.) Following the meeting, a Chair’s Statement was issued.
1. At the start of the meeting, Foreign Minister Kishida conveyed his appreciation to the various countries for attending this meeting and to the ASEAN chair Myanmar for its efforts related to holding the event. He stated that the mid-term review of the "Tokyo Strategy 2012" and the revised "Action Plan" were issued at the Mekong-Japan Summit Meeting held in December last year, and that the initiatives in these documents were being implemented in a steady manner. He added that in the first half of this year, in accordance with three pillars of Mekong-Japan cooperation, Japan announced and gave its signature to approximately 224 billion yen in ODA support. Foreign Minister Kishida then stated that at this meeting, he would like to affirm the progress of Mekong-Japan cooperation and the future direction toward building the ASEAN Community in 2015.
2. Following this, the foreign ministers engaged in discussions concerning the progress and future direction of Mekong-Japan cooperation.
(1) Foreign Minister Kishida commented that, in accordance with the three pillars of the "Tokyo Strategy 2012"; "Enhancing Connectivity",  "Developing Together," and "Ensuring Human Security and Environmental Sustainability," Mekong-Japan cooperation had been steadily progressing this year, and he pointed out that Japan had been promoting "people-centered investment" with the aim of utilizing private sector investment for sustainable development based on private and public sector collaboration, as an approach that is connected with these three pillars. Foreign Minister Kishida also stated that Japan would work together with the Mekong countries in order to examine the future direction of the Mekong-Japan cooperation, with a view to building the ASEAN Community in 2015 and beyond, and that it is important for each of the initiatives of the many countries and institutions involved to be carried out in a complimentary and efficient manner. He then added that Japan intended to move forward Japan-US cooperation in the Mekong region, as well as serving the role of an intermediary in order to consolidate growth in the Mekong region by utilizing OECD.
(2) The foreign ministers of the Mekong countries made the following remarks.
a. The foreign ministers expressed their gratitude regarding the fact that Japan was continuously and steadily moving forward the Mekong-Japan cooperation based on the "Tokyo Strategy 2012," and in particular the fact that Japan was working on; strengthening connectivity through support for infrastructure development, including support for the East-West Economic Corridor (EWEC) and Southern Economic Corridor (SEC), improving investment environment through the conclusion of investment agreements, strengthening people to people exchanges through relaxation of visa requirements, and ensuring sustainability through holding the Green Mekong Forum.
b. The foreign ministers commented that Mekong-Japan cooperation is extremely important for socioeconomic development in the region, so the Mekong region as a whole intends to further strengthen Mekong-Japan relations, with a view to building the ASEAN Community in 2015.
c. The foreign ministers stated that they would like to strengthen collaboration and dialogues between the public and private sectors both in Japan and the Mekong region in order to attract private sector investments and utilize private sector funds.
d. The foreign ministers pointed out that it is extremely important to enhance collaboration among various frameworks in order to make support more efficient, and in this context, they welcomed the fact that Japan has been moving forward collaboration with other countries and institutions in the Mekong region, including the launch of the OECD South East Asia Regional Programme.
3. In conclusion, the foreign ministers affirmed that the Sixth Mekong-Japan Summit Meeting would be held in Myanmar in November this year, and that the next Mekong-Japan Foreign Ministers' Meeting will be held in Malaysia in 2015.