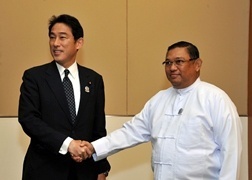 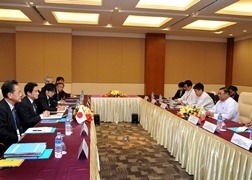 On Saturday, August 9, commencing at 10:45 a.m. (1:15 p.m. Japan time) for approximately 50 minutes, Minister for Foreign Affairs Fumio Kishida during his visit to Nay Pyi Taw, the Republic of the Union of Myanmar, in order to attend the ASEAN-related Foreign Ministers' Meeting, held a meeting with H.E. Mr. Wunna Maung Lwin, Minister for Foreign Affairs of the Republic of the Union of Myanmar. The overview of the meeting is as follows.
1. (1) Foreign Minister Kishida stated that Japan would provide utmost support to Myanmar, which was serving as the chair of ASEAN, in order to make the ASEAN meeting a success. He also mentioned that the "Japan Month" would be launched in late November in order to commemorate the 60th anniversary of the establishment of diplomatic relations between Japan and Myanmar, and that he intended to take this opportunity to further build the momentum of exchanges between the two countries.
(2) In regard to the economic relations and economic cooperation between the two countries, Foreign Minister Kishida commented that he was hoping that the Japan-Myanmar Bilateral Investment Agreement and the Protocol Amending the Air Service Agreement, recently both in effect, would lead to the promotion of investment, and that he was expecting the start of consultations between financial authorities regarding a tax convention. Furthermore, Foreign Minister Kishida pointed out that Japan had decided to provide a yen loan of 10.5 billion yen in regard to The Communication Network Improvement Project to connect the three cities of Yangon, including the Thilawa area where the SEZ had been developed by Japanese companies, Nay Pyi Taw, and Mandalay, and added that Japan intended to continue to cooperate for measures to expedite ODA Loan projects. Foreign Minister Kishida requested Foreign Minister Wunna Maung Lwin to assist the business development of Japanese companies, including the entry of foreign banks into Myanmar, and relaxation of visa requirements on the Myanmar side.
(3) Foreign Minister Wunna Maung Lwin stated that he intended to strengthen cooperation through Foreign Ministry Director-General Level Consultation, Human Rights Dialogues, and Defense Exchanges, etc., and that he would like to handle investment by foreign companies in a manner that is in accordance with international standards, while ensuring transparency. In regard to visas for business purposes, Foreign Minister Wunna Maung Lwin commented that Myanmar had decided to issue one-year-valid multiple entry visas. He then expressed his gratitude for the provision of the 10.5 billion yen loan.
2. Foreign Minister Kishida gave an explanation of the Cabinet decision regarding the basic policies on the development of security legislation as part of Japan's policy of "Proactive Contribution to Peace," and Foreign Minister Wunna Maung Lwin conveyed his understanding, saying that Japan's ideas were appropriate. In relation to this, Foreign Minister Kishida stated that, under the policy of "Proactive Contribution to Peace," Japan would continue to support to encourage moves toward peace with ethnic minorities in Myanmar, and he called for violence to be halted and for peace to be promoted in relation to clashes among the local population in Rakhine State and Mandalay, which was a matter of concern. Foreign Minister Wunna Maung Lwin responded by saying that currently talks with the ethnic minorities were continuing and he was hoping that a ceasefire agreement would be reached as soon as possible. He thanked the Government of Japan for its extensive support with regard to assistance to ethnic minorities, including the efforts of Mr. Yohei Sasakawa, the Special Envoy of the Government of Japan for National Reconciliation in Myanmar, and he stated that Myanmar would like to resolve the clashes among the local population through dialogues.
3. The two foreign ministers exchanged views concerning the importance of the rule of law at sea, North Korean issues including the abduction issue, and the strengthening of the East Asia Summit (EAS).