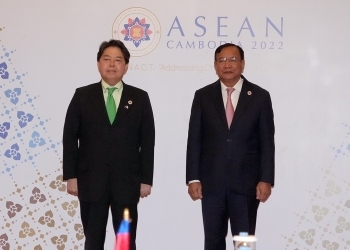 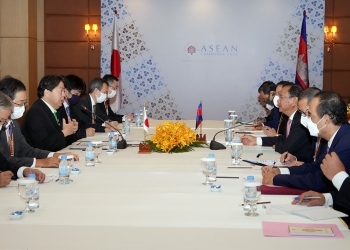 On August 4, commencing at 7:15 a.m. for approximately 35 minutes, Mr. HAYASHI Yoshimasa, Minister for Foreign Affairs of Japan, visiting the Kingdom of Cambodia to attend the Japan-ASEAN Foreign Ministers' Meeting, held a meeting with H.E. Mr. Prak Sokhonn, Deputy Prime Minister and Minister of Foreign Affairs and International Cooperation of the Kingdom of Cambodia. The overview of the meeting is as follows.

Minister Hayashi expressed his gratitude for the condolences received from the Ministry of Foreign Affairs and International Cooperation of Cambodia and the Cambodian people on the passing of former Japanese Prime Minister ABE Shinzo. He expressed his willingness to strengthen bilateral relations which is at the best level ever toward the 70th anniversary of the establishment of diplomatic relations between Japan and Cambodia next year. In response, Deputy Prime Minister Prak Sokhonn expressed his condolences once again on the passing of former Japanese Prime Minister Abe and his willingness to work closely with Minister Hayashi to strengthen bilateral relations in responding to various regional and international situations.