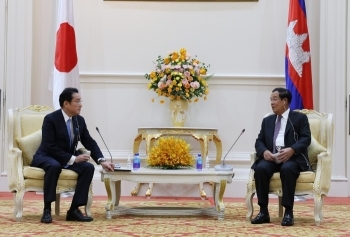 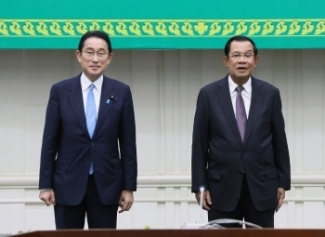 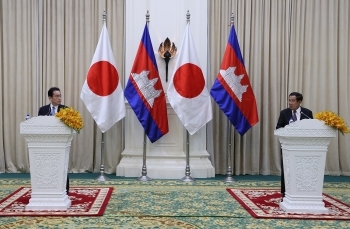 Prime Minister Kishida stated that as a part of important infrastructure development, Japan would provide support to make the Sihanoukville Port operate as a regional hub port. Prime Minister Hun Sen expressed his gratitude for Japan's support to the development of the port and stated that the Cambodian government would like to coordinate together with Japan to that end.

Prime Minister Kishida stated that as this year marks the 30th anniversary of the UN Peace Keeping Operation (PKO) deployment to Cambodia, the recent visit to Japan by Lt. Gen. Hun Manet, Commander of the Royal Cambodian Army, and port calls in Cambodia by Japan's Maritime Self-Defense Force (JMSDF) have enhanced cooperation between the two countries. He also stated that he would like to advance cooperation through continuous visits to the Ream Naval Base including port calls by JMSDF and expansion of bilateral exercises and cooperation in the field of humanitarian aid and disaster relief. In response, Prime Minister Hun Sen stated that Cambodia appreciates and values security cooperation with Japan and would like to further advance this cooperation.

Prime Minister Kishida stated he would support the efforts of companies in both countries to strengthen the resilience of supply chain of the automobile industry and to develop high-skilled industrial human resources, which will lead to digitalization of the manufacturing industry. Prime Minister Hun Sen expressed his appreciation for the Japanese companies’ contribution to the Cambodian economy and industry and stated that he would like to invite more investment from Japanese companies.

Prime Minister Kishida stated that Japan would support Cambodia to hold the implementation of commune elections this June and the general elections next year in a way that reflects the diverse voices from the Cambodian people. Prime Minister Hun Sen asked for Japan's cooperation on holding free and fair elections.

(5) Expansion to new areas of cooperation

Prime Minister Kishida highly appreciated that Cambodia, along with Japan, became a co-sponsor of the resolution on "Aggression against Ukraine" adopted in an emergency special session of the UN General Assembly. Prime Minister Kishida stated that Russia's aggression against Ukraine is a unilateral change of the status quo by force and a clear violation of international law. He further stated that Russia’s aggression shakes the very foundations of the world order and, violate the rule of law and the respect for sovereignty and territorial integrity as stipulated in the UN Charter, etc. He  stated that if the international community does not take firm action, such a situation could occur anywhere in the world and that it is important to clearly support Ukraine's sovereignty and territorial integrity in order to prevent such a situation from occurring in Asia. In response, Prime Minister Hun Sen explained his awareness of the issue, which led Cambodia to join in co-sponsoring the UN General Assembly resolution and the recent responses of ASEAN so far. The two leaders concurred to cooperate in future international meetings.