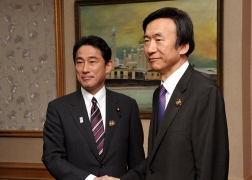 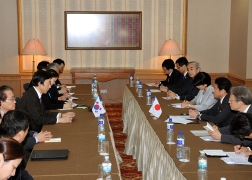 On July 1 (local time), commencing at 4:25 p.m. for approximately 30 minutes, on the margins of ASEAN-related Foreign Ministers’ Meetings in Brunei, Minister for Foreign Affairs Fumio Kishida held a meeting with Mr. Yun Byung-se, Minister of Foreign Affairs of the Republic of Korea. The overview of the meeting is as follows. (The participants on the Japanese side included Mr. Junichi Ihara, Director-General of the Asian and Oceanian Affairs Bureau, and those on the ROK side included Mr. Lee Kyung-soo, Deputy Minister for Political Affairs.)

(North Korean issues were not discussed in this meeting since there were limit of time and much discussion had already taken place at the Japan-U.S.-ROK Trilateral Foreign Ministers’ Meeting which preceded the bilateral meeting.)