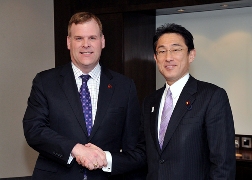 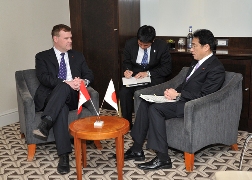 The outline of their meeting is as follows:

Minister Kishida said Japan and Canada are partners in the Asia-Pacific region that share fundamental values and he hoped to cooperate with Minister Baird to develop the Japan-Canada relations. Minister Baird said Canada attaches importance to its relations with Japan and hoped to strengthen ties in all areas, including politics, security, economy and trade.

(1) Minister Kishida said Japan had decided and announced the participation to the Trans-Pacific Partnership (TPP) negotiations and sent officials to Canada for bilateral consultations at the request of Canada. He added Japan hoped to gain the support for Japan's participation to the TPP negotiations at an early date. Minister Baird said that Canada welcomes Japan's announcement to participate in the TPP and he would relay Minister Kishida's remarks to the relevant ministers.

(2) Minister Kishida said he expressed his expectation that the Second Round of Negotiations for a Japan-Canada Economic Partnership Agreement (EPA), scheduled for the second half of April, would be meaningful.

(3) Minister Baird said he had visited Fukushima Prefecture when he came to Japan (in March 2012) and was well aware of the energy situation in the country. He said that Canada would like to work with Japan as a partner, hoping to export crude oil and natural gas to Asia,. Minister Kishida said he welcomes the remarks by Minister Baird and would share them with the relevant ministers to look at how Japan and Canada could cooperate in this area.