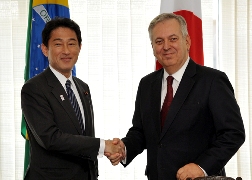 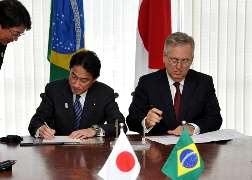 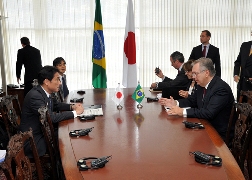 On Monday, September 2, commencing at 12:10 p.m. (local time) for around two hours and 30 minutes, Mr. Fumio Kishida, Minister for Foreign Affairs, who is visiting Brazil, had a Japan-Brazil foreign ministers’ meeting with H.E. Mr. Luiz Alberto Figueiredo Machado, Minister of External Relations, the Federative Republic of Brazil, and attended a luncheon hosted by Minister Figueiredo, at Brazil’s Ministry of External Relations. The outline of the meeting is as follows. Ahead of the foreign ministers’ meeting, a signing ceremony was held between the two ministers in connection with a waiver of visa requirements for diplomatic or official passport holders.
This ministers’ meeting was the first foreign minister’s meeting for Minister Figueiredo since he was appointed.

(1) Both ministers confirmed that the two countries enjoy a special relationship of trust built up over a long history and tradition against a backdrop of human bonds of Japanese descent in Brazil, or Nikkeis, and both welcomed the advances being made in the two countries’ relations not only in political and economic relations, but also in a broad range of areas such as education, science and technology, cooperation in the international arena and culture and sports.

(2) Both ministers shared the view that the both governments would work together to promptly realize a visit to Japan by H.E. Ms. Dilma Vana Rousseff, President of the Federative Republic of Brazil, which had been scheduled for the end of June this year but was postponed due to domestic circumstances in Brazil.

(3) Both ministers shared the view that 2015, which will be the 120th anniversary of the conclusion of the Treaty of Friendship, Commerce and Navigation between Japan and Brazil, will be celebrated not only by holding a large number of events in both countries, but also by strengthening and deepening bilateral relations further.

(4) Both ministers praised the signing of the visa exemption arrangement for diplomatic or official passport holders between the two countries as contributing to the promotion of exchanges between the two countries. They also welcomed an effective agreement reached recently on treaty between Japan and the Federative Republic of Brazil on the transfer of sentenced persons as contributing to cooperation in the field of justice.

(6) Minister Kishida noted that at the 4th Japan-Brazil Wise Men Group that was held recently, recommendations were prepared for the Prime Minister of Japan and the President of Brazil, and he said he hopes the two countries will be able to work on challenges that require an intergovernmental response, in order to connect the rewarding debate with results. Minister Figueiredo expressed a sense of expectation that investment in Brazil from Japan will increase.

of pork from Santa Catarina, and Minister Kishida replied that he was delighted with the outcome, which arose out of the efforts of the parties concerned.

3. Cooperation in the International Arena

Minister Kishida said he wants Japan and Brazil to cooperate together in the international arena in areas such as United Nations Security Council reform, nuclear disarmament and the World Trade Organization (WTO), and Minister Figueiredo shared that view.

* The foregoing is a provisional translation. The date indicated above denotes the date of issue of the original press release in Japanese.
Page Top
Back to Countries & Regions