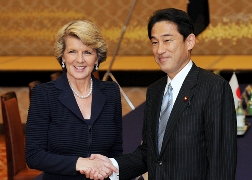 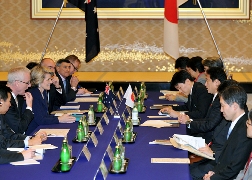 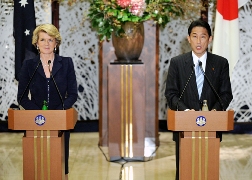 On October 15, commencing at 6:30 p.m. for approximately 30 minutes, Mr. Fumio Kishida, Minister for Foreign Affairs, held a Japan-Australia Foreign Ministers’ Meeting with the Hon Julie Bishop MP, Minister for Foreign Affairs of Australia, who was visiting Japan, and also held a working dinner with her from 7:30 p.m. for approximately 80 minutes. An overview of the meeting and the working dinner is as follows:
1 Minister Kishida welcomed Foreign Minister Bishop’s visit to Japan. At the same time he stated that the Government of Japan emphasized a “strategic partnership” with Australia, and would like to further deepen cooperation in the fields of security and defense. Minister Kishida also stated that the Government of Japan wanted to work together with Australia for establishing new economic rules in the Asia-Pacific region, while further strengthening the Japan-Australia bilateral economic relationship through the Japan-Australia Economic Partnership Agreement (EPA) and the Trans-Pacific Partnership (TPP). Foreign Minister Bishop stated that Japan is the “best friend in Asia” for Australia, and she was pleased to have frequent meetings with Minister Kishida since her inauguration. Foreign Minister Bishop added that she would like to strengthen cooperation between Japan and Australia in many fields, and the Government of Australia would support Prime Minister Abe’s efforts on his security policies.
2 Foreign Minister Bishop explained that the Government of Australia would launch the “New Colombo Plan”, which dispatches Australian undergraduate students to Japan and other Asian countries through overseas education programs and internships for the purpose of enhancing their knowledge of Asia, as an initiative of the conservative coalition government; and Japan was selected as one of the countries for the pilot project commencing in 2014. Minister Kishida stated that since the “New Colombo Plan” would further deepen people-to-people exchanges between Japan and Australia, he welcomed this initiative and also would like to provide any possible support for the plan (see Joint Press Release).
3 In the working dinner, the two ministers exchanged opinions on regional situations, and shared the view that the two countries would closely coordinate and cooperate on various regional and international issues in the future as well.