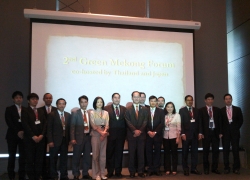 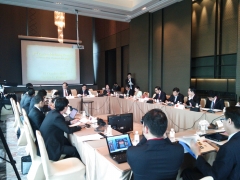 1. The 2nd Green Mekong Forum was co-hosted by the Government of the Kingdom of Thailand and the Government of Japan in Bangkok, Thailand, on 21 October 2013. The Forum was co-chaired by Mr. Chutintorn Gongsakdi, Director General, Department of International Economic Affairs, Ministry of Foreign Affairs of Thailand and Mr. Hidenao Yanagi, Deputy Director-General for the Southeast and Southwest Asian Affairs Department from the Ministry of Foreign Affairs of Japan.  The participants were representatives from the relevant Ministers/Agencies concerned from the members of Mekong-Japan Cooperation including Japan, the Kingdom of Thailand, the Kingdom of Cambodia, the Lao People's Democratic Republic, Republic of the Union of Myanmar, and the Socialist Republic of Viet Nam.  Representatives from the private sector from Thailand and Japan as well as the Japanese local authorities also took part.
2. The aim of this Forum was to follow up on activities undertaken by both Japan and the Mekong region countries in order to implement the “Action Plan for ‘A Decade toward the Green Mekong’ Initiative”, which was adopted by the leaders of Japan and the Mekong region countries at the 2nd Mekong-Japan Summit in October 2010 in Hanoi. The 1st Green Mekong Forum was held in Bangkok in June 2011.
3. At the Forum, Japan and the Mekong region countries exchanged views on the six issues listed in the Action Plan, such as 1) improvement of urban environment, 2) water resource management, 3) sustainable forest management, 4) disaster prevention and response to disasters, 5) conservation of biodiversity and 6) controlling and reducing greenhouse gas emission.
4. Furthermore, Japan and the Mekong region countries held the session “Economic development and Environmental conservation”, which focused on ways to promote economic development with environmental consideration. They exchanged views through sharing various cases and efforts that were introduced at the session.
5. At these 6 follow up sessions and the session “Economic development and Environmental conservation”, JICA, Japanese local authorities (Kitakyushu City) and the private sector (JGC CORPORATION (NIKKI K.K.), KOBELCO ECO-Solutions Co., Ltd.) from Japanese side introduced their respective environmental technologies and efforts with a view to further developing the “public and private cooperation approach” which has been emphasized in the Action Plan, while Thailand invited experts from related public agency (Ministry of Natural Resources and Environment) to give presentations on Thailand’s environmental measures. Other participants from the private sector include representatives from Mitr Phol Group. Through sharing information and exchanging views among participants from government agencies, local government and the private sector, Japan and the Mekong region countries reaffirmed the importance of public and private cooperation in tackling environmental issues and climate change in the Mekong region.
6. Japan and the Mekong region countries reaffirmed that they would continue efforts based on the “Action Plan for ‘A Decade toward the Green Mekong’ Initiative” towards the realization of “Green Mekong”, rich in biodiversity, resilient to natural disasters, blessed with sustainable water and forest resources, and successful in both environmental protection and economic growth. They reaffirmed the importance of the Green Mekong Forum as an occasion to follow up these efforts, and reached an consensus to further improve it.
7. The outcome of the Forum will be reported to the 5th Mekong-Japan Summit Meeting in December 2013 in Tokyo.