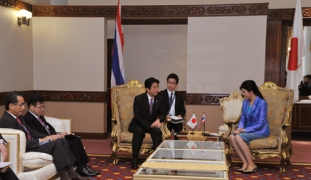 On Wednesday, October 9, commencing at around 6:20 p.m. for approximately 20 minutes, Prime Minister Shinzo Abe met with H.E. Ms. Yingluck Shinawatra, Prime Minister of the Kingdom of Thailand, in Brunei, on the sideline of  ASEAN-related Summit Meetings. An overview of the conversation is as follows.
1. At the outset, Prime Minister Yingluck offered her congratulations on Tokyo’s successful bid to host the Olympic and Paralympic Games in 2020. In response Prime Minister Abe expressed his gratitude.
2. Prime Minister Yingluck stated that she would like to further develop the relationship between Thailand and Japan, and that the visa exemption of visas for Thai tourists for a short term- period significantly contribute to deepening the relationship of the two countries. Prime Minister Abe mentioned with satisfaction that it is an outstanding fact that the number of tourists from Thailand to Japan in July and August has almost doubled on a year-to-year basis, respectively.
3. Prime Minister Yingluck made a remark that she would like  cooperation from Japan for infrastructure development in Thailand, in particular, high-speed transit rail/urban rail. In response, Prime Minister Abe experessed his intention to cooperate wherever possible, including Japan’s technology.
4. Prime Minister Abe offered his condolences to the damages caused by the flood in Thailand and also requested the Thai Government to respond firmly, stating there are many Japanese enterprises operating in the country.
5. At the end, Prime Minister Abe gave an explanation on Japan’s security, stating that Japan is determined to contribute to the peace and stability of regional and international society more actively than ever from the standpoint of proactive pacifism.