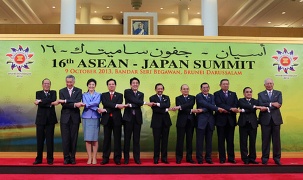 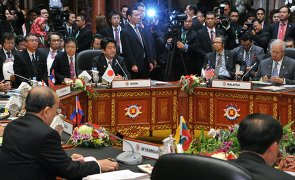 The Sixteenth Japan-ASEAN Summit was held on October 9th, 2013 in Bandar Seri Begawan, Brunei Darussalam. Prime Minister Abe attended the meeting. The following is a summary of Prime Minister Abe’s statement delivered during the Summit.

Prime Minister Abe opened his statement by expressing his delight to be back at the Japan-ASEAN Summit since his last attendance seven years ago. He noted that Brunei Darussalam marked his 8th ASEAN Member States that he has visited since taking office and reflects the importance Japan puts on ASEAN. He looked forward to visiting all ten Member States by the end of this year which marks the 40th anniversary of ASEAN-Japan Friendship and Cooperation, as well as welcoming all ASEAN Leaders to Tokyo on December during the ASEAN-Japan Commemorative Summit.

Review of Japan-ASEAN Relationship and the Way Forward

Prime Minister Abe wished that all ASEAN Leaders will enjoy their stay in Japan during the ASEAN-Japan Commemorative Summit in December, and stated that Japan is preparing for the Summit so that the visits would be fruitful and worthy of commemorating the 40th anniversary of ASEAN-Japan Friendship and Cooperation.
He also mentioned that the most significant outcome of the Commemorative Summit would be to address to the world a vision that will direct the future of Japan and ASEAN, and wished that concrete measures and projects can be discusses so that there will be productive results.
Additionally, the Prime Minister introduced some of the measures that Japan is currently undertaking:
(1) Assistance towards ASEAN’s Community Building
Japan will continue to actively assist in ASEAN’s community building targets by 2015 with the aim for ASEAN integration in mind. Japan will especially bolster cooperation on ASEAN Connectivity which will be a core of ASEAN community building, as well as cooperation on narrowing gaps and disaster management.
(2) Economic Cooperation
Japan will further increase economic exchanges between Japan and ASEAN, including through assistance on doing companies to do businesses in both directions. Japan would like to advance bilateral financial cooperation including the expansion of currency swap in order to contribute to stability in the financial market. He also added that he would like to continue its coordination with ASEAN on the negotiations for RCEP and AJCEP while utilizing existing bilateral EPAs.
(3) New Cultural Policy
In order to create a future where Japan and Asia learn together, Japan will promote mutual and continuous cultural exchanges while respecting the diversity of each other’s culture. Japan will launch a new cultural exchange policy at the Commemorative Summit.
(4) Youth Exchange
Japan will advance youth exchange as an investment towards the future of  Japan-ASEAN  relationship  through  JENESYS  2.0  that  Prime Minister Abe launched early this year.
(5) Cooperation in New Areas
Japan will enhance efforts on cooperation against new threats such as global terrorism and cybercrimes, as well as on new challenges that ASEAN faces due to economic development, such as Universal Health Coverage and access to healthcare services, the environment, urbanization, promotion of women’s empowerment among others.

(1) Japan’s Security Policy
Prime Minister Abe introduced that Japan will further actively contribute to regional/global peace and stability from the standpoint of “proactive contribution to peace.” The Minister also explained that he is promoting efforts such as the establishment of its National Security Council, drafting of the National Security Strategy, reviewing the National Defense Program Guidelines, as well as examining its rights to exercise collective self-defense and participation towards collective security measures of the United Nations.
(2) Japan-China Relations
Prime Minister Abe also raised the issue of Japan-China relations and explained its basic position, noting that the bilateral relationship is one of the most important one for Japan. He also noted that Japan is ready to advance cooperation from a broad perspective, and that the door for dialogue is always open on Japan’s side.
(3) South China Sea
On the South China Sea, the Prime Minister emphasized the importance for ASEAN to keep its unity so that disputes would be resolved peacefully in accordance to international law.
(4) North Korea
The Prime Minister also addressed the issues of North Korea, emphasizing that North Korea’s continued nuclear and missile program is a threat to the Asian region as well as to the entire international society, and that we must continue to strongly urge North Korea to take concrete actions towards its denuclearization. He also stated that it is extremely important for each ASEAN Member State to steadfastly implement relevant UN Security Council Resolutions including on export control.
The Prime Minister also stressed that the issue of abductions is a universal problem to the international community as a whole, and requested
each country’s understanding and cooperation.