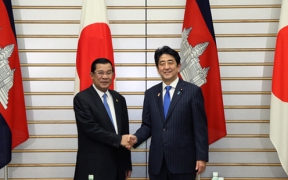 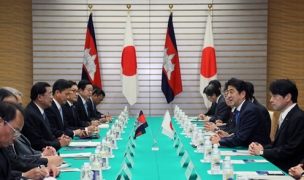 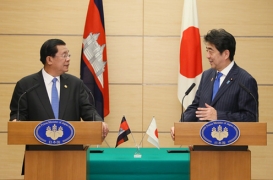 On December 15 from 5:00 p.m. to 5:45 p.m., Prime Minister Shinzo Abe held a meeting with Samdech Akka Moha Sena Padei Techo Hun Sen, Prime Minister of the Kingdom of Cambodia, who was on his official bilateral visit to Japan to attend the ASEAN-Japan Commemorative Summit. An overview of the meeting is as follows:

1. Opening remarks
At the outset, Prime Minister Abe stated that the current official visit to Japan by Prime Minister Hun Sen will both mark the successful completion of the year of the 60th anniversary of the establishment of diplomatic relations and a new beginning of friendship and cooperation between the two countries. Prime Minister Abe expressed his gratitude for Cambodia’s cooperation as the ASEAN coordinating country for Japan, which contributed to the remarkably successful outcome of the ASEAN-Japan Commemorative Summit. He also expressed hope that Prime Minister Hun Sen will enjoy Kyoto in the winter during his stay.
In response to this, Prime Minister Hun Sen stated that he was pleased to visit Japan upon the invitation from the Government of Japan. He renewed his appreciation for Japan’s assistance for the peace process and reconstruction in Cambodia, and stated that mutual visits between the two leaders served as an important step in the 60th anniversary of bilateral diplomatic relations.

2. Bilateral relations
The two leaders, upon the proposal from Cambodia during Prime Minister Abe’s visit last month, decided to upgrade the bilateral relations from an existing “new partnership” to a “strategic partnership” and also to coordinate and cooperate more closely on regional and international issues.
They also shared the view that the signing of the memorandum of cooperation on defense cooperation and exchanges would serve as a great showcase of their strategic partnership.

3. Democracy and the rule of law
Prime Minister Abe stated that Japan would continue to support reforms and efforts for reinforcing democracy and the rule of law in Cambodia, and expressed his expectation that the political situation in Cambodia would be normalized in a timely fashion through dialogue and reconciliation. Prime Minister Abe stated his intention to dispatch a study team in order to support election reforms. In response to this, Prime Minister Hun Sen stated that he would normalize the domestic situation through dialogue with the opposition parties, reiterating his gratitude for Japan’s assistance.
Prime Minister Abe stated that he wishes to continue coordination with Cambodia for smooth progress and towards successful completion of the trials in the Extraordinary Chambers in the Courts of Cambodia, and expressed his strong expectation of contribution from Cambodia to the trial. Prime Minister Hun Sen expressed his gratitude for Japan’s support of the trials and his determination to cooperate for the smooth conclusion of the trial.

4. Economic issues and deevelopment cooperation
With the establishment of the ASEAN Community in 2015 in his mind, Prime Minister Abe stated that the Government of Japan decided to newly provide a total of 13.8 billion JPY of ODA loans for three projects, in the fields of road construction support for strengthening connectivity such as the Southern Economic Corridor, development of power transmission and distribution networks in the metropolitan area, which would contribute to investment promotion, and renovation/improvement of irrigation and sewage systems as measures to reduce poverty. Prime Minister Abe welcomed the signing of an exchange of notes regarding these three projects. Prime Minister Hun Sen welcomed Japan’s assistance.

5. People-to-people exchange
The two leaders welcomed the decision between the two countries to waive visa requirements to diplomatic and official passport holders respectively, following the decision to provide multiple visas to ordinary passport holders, for the promotion of people-to-people exchange
They shared the view that formal negotiations on an air services agreement will commence, in anticipation of the commencement of direct flights between the two countries.