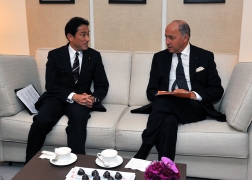 On Tuesday, September 24, commencing at 6:45 p.m. (7:45 a.m., Wednesday, September 25, Japan Standard Time), for approximately 30 minutes, Minister for Foreign Affairs Mr. Fumio Kishida, who is visiting New York to attend the United Nations General Assembly, held a meeting with H.E. Mr. Laurent Fabius, Minister of Foreign Affairs of the French Republic. An overview of the meeting is as follows. The meeting was held following a Japan-France summit meeting, and the two foreign ministers were also present at the summit meeting.

i)
Minister Kishida said that in order to strengthen the “exceptional partnership” between Japan and France, it will be important to solidly follow up the results of the Japan-France summit meeting held during the visit to Japan in June by Mr. Francois Hollande, President of the French Republic. Minister Kishida hopes to hold ministerial meetings of foreign ministers and defense ministers between Japan and France promptly, and create effective results. In order to do so, he mentioned that it will be important to work out the details of defense equipment cooperation and export control measures.
ii)
In response, Minister Fabius said that he agrees, and wants to move ahead concretely with work on holding ministerial meetings on foreign affairs and defense.

i)
Minister Kishida said that for both Japan and France to achieve the benefits of growth, prompt conclusion of the Japan-EU EPA is extremely important. He wants to continue to work together so that the outcome of the negotiations is a positive one.
ii)
Minister Fabius replied that he expects an ambitious and well-balanced outcome to be attained in the negotiations.

2. The situation in Syria

(1) Minister Kishida inquired about Minister Fabius’ views on the issue, the overview of his recent visit to Moscow, and related topics. Minister Fabius mentioned that he is hopeful that a binding resolution will be adopted with regard to the chemical weapons problem, and noted that the Geneva II process will be important in regard to the issue of political consensus.

(2) Minister Kishida replied that a powerful UN Security Council resolution should be adopted, and that Japan is paying close attention to the series of developments.

3. At the end of the meeting, the ministers exchanged their views on the situation in central Africa and the issue of climate change, and shared the view that Japan and France will strengthen cooperation regarding these issues also.