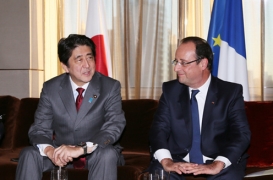 On Tuesday, September 24, commencing at 6:15 p.m. (7:15 a.m., Wednesday, September 25, Japan time) for about 30 minutes, Prime Minister Mr. Shinzo Abe, who is visiting New York to attend the United Nations General Assembly, held a meeting with H.E. Mr. Francois Hollande, President of the French Republic. An overview of the meeting is as follows.

(1) Prime Minister Abe raised the following points regarding the situation in Syria:

i)
A report by a United Nations inspection team concluded that chemical weapons had been used in Syria, and Japan once again strongly condemns the use of chemical weapons.
ii)
The problem of chemical weapons use in Syria also has repercussions for North Korea and other countries possessing weapons of mass destruction, and it should also be viewed as a problem for Japan. Japan is paying close attention to whether the Government of Syria will sincerely respond to it or not. A powerful Security Council resolution to reinforce the decision of the Organization for the Prohibition of Chemical Weapons (OPCW) should be adopted.
iii)
Prime Minister Abe expressed his respect for the Government of France’s efforts to resolve the Syrian problem. As President Hollande mentioned in a television interview, the agreement between the US and Russia is a major step but is not the goal of this problem.
iv)
Responsibility for the worsening of the situation in Syria clearly lies with the Assad Administration, which is disregarding the deteriorating humanitarian conditions, and Japan will contribute to international efforts to halt violence, initiate political dialogue and improve the appalling humanitarian conditions in Syria, and will proactively engage in assisting refugees and supportive countries.

(2) In response, President Hollande expressed his gratitude for Japan’s stance regarding the Syrian problem, and said the key will be whether it will be possible to implement the US-Russia agreement from now on. President Hollande said the humanitarian conditions in Syria are grievous, and France will continue to emphasize cooperation with Japan in order to improve those conditions.

(3) Both leaders shared the view that a powerful UN Security Council resolution is required.

(4) Additionally, with regard to the Iranian situation President Hollande explained his meeting with Mr. Hassan Rouhani, President of Iran, and Prime Minister Abe explained that Mr. Masahiko Koumura, Vice-President, Liberal Democratic Party, had visited Iran as a Special Envoy of the Prime Minister.

Prime Minister Abe indicated that Japan will make every effort to decommission the reactors at the Fukushima Daiichi Nuclear Power Station. Additionally, Japan will disseminate accurate information, and wants to gather together the world’s technologies and knowledge in a manner open to the world, and work to resolve the problem. Prime Minister Abe mentioned Japan wants to continue to work closely with France in the future as well. In response, President Hollande said France is prepared to support Japan at any time.

With regard to the economy, Prime Minister Abe explained that he announced new growth strategies in June as the “Japan Revitalization Strategy,” and is in the process of making an all-out effort to implement it. As part of that process Japan is placing an emphasis on cooperating with France, a major nation of technology and innovation. President Hollande replied that cooperation between Japan and France is beneficial in terms of boosting international competitiveness, and that France supports the Japan-EU EPA.