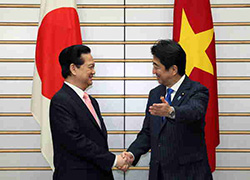 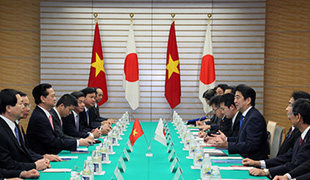 At the outset, Prime Minister Abe said he was very pleased to welcome Prime Minister Dung to Japan, referring to the warm hospitality with which he was received in Viet Nam during his first overseas trip after taking office in January. Prime Minister Abe expressed his delight at the breadth and depth the bilateral relationship has gained throughout the "Japan-Viet Nam Friendship Year" (40th anniversary of the establishment of diplomatic relations between Japan and Viet Nam), whose opening was jointly declared by the two leaders, and congratulated the successful completion of the Friendship Year.

Regarding the maintenance of maritime peace and stability, Prime Minister Abe expressed Japan's desire to further deepen Japan-Viet Nam cooperation, and in this connection, to commence concrete talks with Viet Nam on the provision of patrol vessels to the Viet Nam Coast Guard. Prime Minister Dung, expressing his gratitude, committed Viet Nam's cooperation for its realization.

3.Cooperation for development of human resources

Prime Minister Abe mentioned the importance of the development of human resources, and stated that the Government of Japan would like to cooperate with Viet Nam for the concept of the Japan-Viet Nam University, towards which the people concerned in both countries are moving forward. Prime Minister Dung expressed hope that both governments will work together towards early realization of Japan-Viet Nam University.

Prime Minister Abe stated that the Government of Japan would continue to provide assistance to Viet Nam so that Viet Nam would achieve its industrialization goals, and pointed out that infrastructure development in the fields such as transportation and energy would be the basis of sustainable growth. In this connection, Prime Minister Abe conveyed a new decision by the Government of Japan to provide a total of approximately 100 billion JPY of ODA loans for five projects. Prime Minister Abe also stated that Japan would advance cooperation with Viet Nam in specific projects such as nuclear power, Long Thanh International Airport, an Eco-City development, coal-fired power, the Japan-Viet Nam Friendship Cho Ray Hospital, and the Joint Credit Mechanism.

Prime Minister Dung, for his part, expressed gratitude for the assistance from Japan to date for the development of various infrastructures, the decision on the new ODA loans, and Japan's support in crafting the action plan of Viet Nam's industrialization strategy. Prime Minister Dung requested cooperation from Japan to increase investment by Japanese companies in Vietnam. Prime Minister Abe called for further efforts from the Vietnamese side in implementing the proposals of the "Japan-Viet Nam Joint Initiative" towards creating a better investment environment in Viet Nam. Furthermore, Prime Minister Abe stated that he was pleased that a Memorandum on Cooperation in the field of the environment was signed on December 13 between the authorities concerned of the two countries.

Prime Minister Abe welcomed Viet Nam's decision to participate in the Peacekeeping Operations, as well as the first meeting of the Vice-Ministerial level security dialogue held between Japan and Viet Nam.

The two leaders exchanged views on regional and international situations, including the issue of the South China Sea. Prime Minister Abe explained Japan's position regarding China's establishment of an Air Defense Identification Zone.

Prime Minister Abe requested the support of Viet Nam on the UN resolution on the situation of human rights in North Korea.