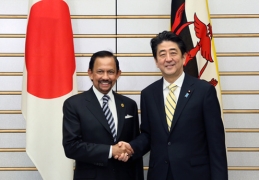 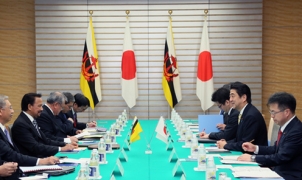 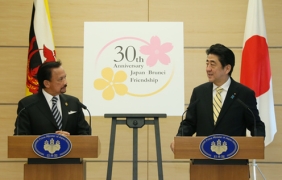 On December 13, for approximately 25 minutes from around 11:00 a.m, Prime Minister Shinzo Abe held a meeting with His Majesty Sultan Haji Hassanal Bolkiah of Brunei, during His Majesty’s visit to Japan to attend the ASEAN-Japan Commemorative Summit. The meeting proceeded as follows. The meeting was also attended by Mr. Hiroshige Seko, Deputy Chief Cabinet Secretary; Mr. Kenichi Suganuma, Japanese Ambassador to Brunei and others from the Japan side; and by Pehin Lim Jock Seng, Minister of Foreign Affairs and Trade II and others, from the Brunei side.

At the joint press announcement after the meeting, both leaders announced a logo commemorating the 30th anniversary of the establishment of Japan-Brunei diplomatic relations in 2014.

Prime Minister Abe paid deference to His Majesty Sultan Haji Hassanal Bolkiah for His Majesty’s hard work and leadership as the chair of ASEAN throughout this year. He also hoped that both countries will further develop bilateral relations through the 30th anniversary of the establishment of diplomatic relations in 2014. His Majesty Sultan Haji Hassanal Bolkiah mentioned that His Majesty was delighted to visit Japan again and looking forward to have a fruitful discussion in the meeting.

Prime Minister Abe expressed his gratitude for the efforts made by Sultan Bolkiah for deepening Japan-ASEAN cooperation in various areas this year, and both leaders confirmed their determination to lead the Japan-ASEAN Summit Meeting to a success as the co-chairs. Prime Minister Abe also stated that next year will mark the first step for the region to implement its Vision Statement on ASEAN-Japan Friendship and Cooperation in anticipation of the establishment of an ASEAN Community in 2015, and showed his intention to work closely with His Majesty Sultan Haji Hassanal Bolkiah continually on a variety of regional situations. His Majesty Sultan Haji Hassanal Bolkiah, as a chair of ASEAN, expressed His Majesty’s gratitude for Japan’s support throughout this year.

Both leaders shared the view that they would further deepen bilateral relations next year through the 30th anniversary of the establishment of diplomatic relations. Prime Minister Abe expressed his gratitude for Brunei’s stable supply of LNG once again. He also mentioned that Japan wants to promote cooperation with Brunei in the field of energy, and further strengthen the dialogue in the field of defense.