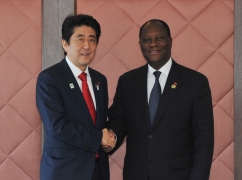 (Photo: Cabinet Public Relations Office)
Today in Yokohama, for about 15 minutes from 4:05 pm, Japanese Prime Minister Shinzo Abe had a meeting with H.E. Mr. Alassane Ouattara, President of Republic of Cote d’Ivoire. The following is the gist of the meeting. President Ouattara is visiting Japan to participate in the 5th Tokyo International Conference on African Development (TICAD V) held from June 1 to June 3.
1. At the beginning, Prime Minister Abe welcomed President Ouattara’s visit to Japan and mentioned that he also met SEM. Kigbafori Guillaume SORO, President de l’Assemblee Nationale, Repubilque de Cote d’Ivoire in March, this year. The Japanese prime minister also expressed his hope for development of Japan and Africa in the wake of TICAD V, which marks the 20th anniversary of the TICAD process. In response, the Cote d’Ivoire president expressed his appreciation for being invited to TICAD V, and mentioned that TICAD V is being convened at a timely moment as Cote d’Ivoire is experiencing political stability and strong economic growth.

2. President Ouattara continued by mentioning that an increasing number of Japanese companies are entering into Cote d’Ivoire, and also expressed his appreciation for Japan’s assistance in food problems and the recovery of the forests, among others. He also asked for further assistance in other issues such as water, environmental measures, and climate change.

3. Prime Minister Abe commended President Ouattara for his leadership in promoting national reconciliation and development. He added that Japan is considering to send a public-private joint mission to Cote d’Ivoire in the near future in order to promote trade and investment from the perspective of strengthening relationship with the country, an economic power in West Africa. Mr. Abe continued by paying his respects to the leadership of Mr. Ouattara, who also serves as the chairman of the Economic Community of West African States (ECOWAS), for promoting peace and stability in the Sahel. He said that Japan will provide strong support for the undertakings of nations in the Sahel.

4. The two parties also exchanged opinions on the cooperation in the international arena, including development in Africa.