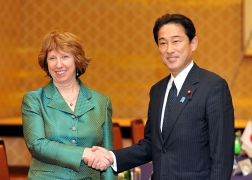 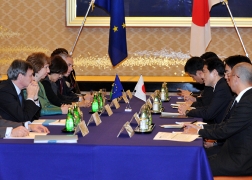 On Monday, October 28, from 18:05 for around 2 hours, Mr. Fumio Kishida, Minister for Foreign Affairs of Japan, held a Foreign Ministers’ Meeting and working dinner with Ms. Catherine Ashton, High Representative of the Union for Foreign and Security Policy, Vice-President of the European Commission at Iikura House. The outline of the meeting and the working dinner was as follows. Ms. Ashton will visit Hiroshima Prefecture on Thursday, October 31.

1. Confirming to hold the next Japan-EU Summit on November 19 in Tokyo.
2. Affirming to enhance security and economic cooperation as well as to promote “global interests” at the next Summit.
3. Reaffirming to continue close coordination on regional issues in the Middle East including Iran and East Asia.

Overview of the meeting

1. Opening
Mr. Kishida stated that Japan attaches great importance to cooperative relations with the EU which shares the fundamental values, and welcomed Ms. Ashton’s timely visit to Japan ahead of the Japan-EU Summit next month along with her visit to Hiroshima later of her stay in Japan. In response, Ms. Ashton expressed her delight to visit Japan and exchange views on the future of Japan-EU relations with Mr. Kishida and stated that she is ambitious of Japan-EU relations and considers that Japan and the EU have much potential beyond Economic Partnership Agreement (EPA) and Strategic Partnership Agreement (SPA). She further stated that the Japan-EU Summit Meeting in November will provide directions for future Japan-EU relations.

2. Prospects for Japan-EU Cooperation
(1) Enhancing cooperation in security area
Mr. Kishida said that Japan has been a peaceful nation for the past 68 years after the end of the Second World War and will continue to follow that path. Mr. Kishida also stated that from the stand point of Japan as a “Proactive Contributor to Peace” based on the principle of international cooperation, Japan will contribute proactively to peace and stability in the region and international communities. In this context, he explained the progress on the discussions regarding establishment of the National Security Council, development of the National Security Strategy and exercise of the right to collective self-defense. On top of that, Mr. Kishida expressed his willingness to deepen Japan-EU cooperation in countermeasures against piracy off the Coast of Somalia, Cyber Security, Space, Terrorism and others.
Ms. Ashton responded by saying that there are great interest in Japan’s new security strategy in Europe and its development is crucial and well-timed when Japan intends to be a security provider in the region and the world. She evaluated Japan’s efforts to explain with great care its policy to concerned countries. She stated that this would give opportunities for Japan and the EU to promote cooperation in the areas that Mr. Kishida mentioned earlier.

(2) Enhancing cooperation in economic area
Mr. Kishida stated that Japan would contribute to the global economy by reviving the Japanese economy through Abenomics and stressed that Japan would make efforts for early conclusion of negotiations on a comprehensive and high level EPA.
In response, Ms. Ashton said that Abenomics, especially the growth strategy as the third arrow, is attracting much attention in Europe. As for the EPA, she expressed her shared recognition of the necessity to work with ambition for making the agreement as comprehensive as possible.

(3) Promoting “global interests”
Mr. Kishida said that it is essential for Japan and the EU to cooperate on promotion of “global interests” and he would like to work with the EU in establishing Code of Conduct for Outer Space and addressing climate change amongst others.
Ms. Ashton responded that Japan is a natural partner to cooperate for economy, security and global interests. She also stated that Japan and the EU should enhance their cooperation by taking every opportunity and further promote collaboration on international challenges including those of space and cyber as well as regional issues.

3. Regional Issues
(1) Iran
Ms. Ashton expressed her appreciation for Japan’s support to the EU 3+3 and explained the current efforts by the EU 3+3. In response, Mr. Kishida stated that Japan will make the best use of the traditional friendship with Iran and will continue to encourage Iran to take concrete actions with the international community. To that end, he confirmed to continue close cooperation with the EU.
(2) Other issues
Mr. Kishida and Ms. Ashton exchanged views on situations in East Asia, Egypt, Middle East Peace process, the relationship with Russia and so on.

4. Closing
At the end of the meeting, Mr. Kishida and Ms. Ashton agreed on the date of the next Japan-EU Summit as November 19 in Tokyo.