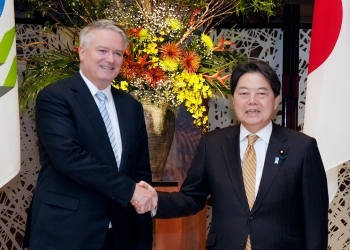 On January 24, commencing at 11:30 a.m., Mr. HAYASHI Yoshimasa, Minister for Foreign Affairs of Japan, held a working lunch with Mr. Mathias Cormann, Secretary-General of the Organisation for Economic Co-operation and Development (OECD), who is visiting Japan upon the invitation of the Ministry of Foreign Affairs, for approximately 1 hour. The overview is as follows.