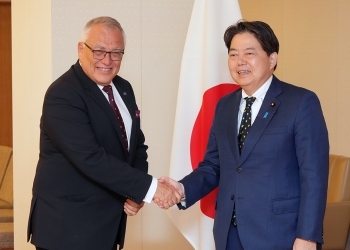 On October 21, commencing at 3:10 p.m. for approximately 20 minutes, Mr. HAYASHI Yoshimasa, Minister for Foreign Affairs of Japan, received a courtesy call from His Excellency Judge Piotr Hofmański, President of the International Criminal Court (ICC). The overview of the meeting is as follows.