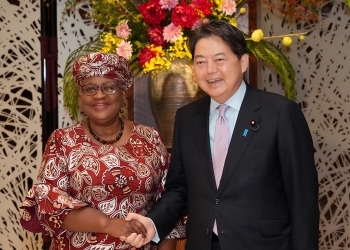 On October 19, commencing at around 7:40pm, for approximately 80 minutes, Mr. HAYASHI Yoshimasa, Minister for Foreign Affairs of Japan, held a working dinner with Dr. Ngozi Okonjo-Iweala, Director-General of the World Trade Organization (WTO). The overview of the meeting is as follows.