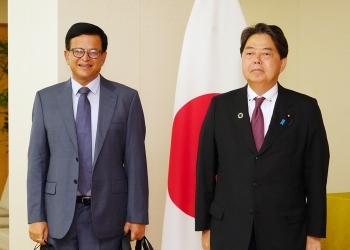 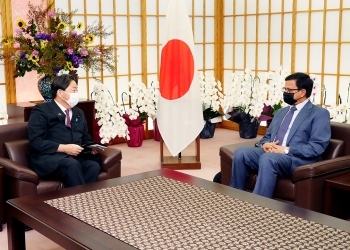 On September 7, commencing at 9:40 a.m., Mr. HAYASHI Yoshimasa, Minister for Foreign Affairs of Japan, received a courtesy call from Mr. Nikhil Seth, Executive Director, United Nations Institute for Training and Research (UNITAR) and Assistant Secretary-General of the United Nations, who is visiting Japan, for approximately 30 minutes. The overview of the meeting is as follows.

Established in 1963. Aims to raise the efficiency of the United Nations itself and promote the maintenance of peace and security and socio-economic development. Mainly responsible for training government officials and staff members of United Nations or other specialist entities, primarily in developing countries, as well as conducting surveys related to United Nations functions and goals. Headquarters located in Geneva, Switzerland. Office in Hiroshima opened in 2003, making it the only international organization with an office in the Chugoku/Shikoku region.