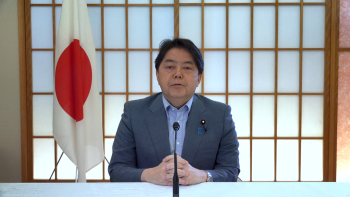 On 20th – 22th May, USJETAA JET35 Alumni Reunion was held in Seattle, the U.S.. Mr. HAYASHI Yoshimasa, Minister for Foreign Affairs of Japan, delivered a video message at the event.

Minister HAYASHI stated the alumni have made significant contributions as grassroots ambassadors to deepening mutual understanding between Japan and the United States. Furthermore, he expressed appreciation for all the alumni, as they had provided students and the communities in which they lived in Japan with the opportunity not only to learn English, but also to encounter a world beyond Japan's borders, full of different cultures, ideas, and people.

In commemoration of the 35th anniversary of the JET Program, the USJETAA, which organizes JETAA (alumni associations of former JET Program participants) chapters throughout the U.S., provided an opportunity for former JET participants from the U.S. to meet together.