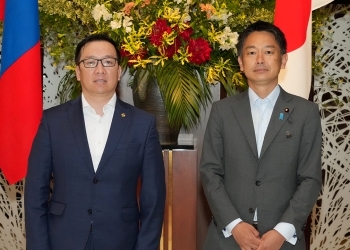 On May 18th, commencing at 12:00, for approximately 90 minutes, Mr. UESUGI Kentaro, Parliamentary Vice-Minister for Foreign Affairs, held a lunch meeting at the Iikura Guest House with H.E. Mr. Bat-Ulzii BAT-ERDENE, Minister of Nature, Environment and Tourism of Mongolia, who was making a working visit to Japan. The overview of the meeting is as follows.