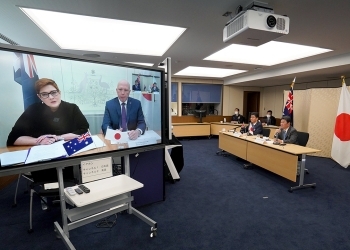 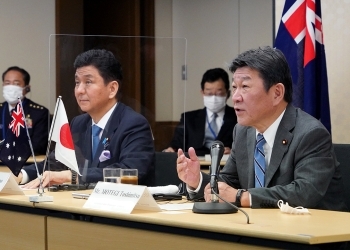 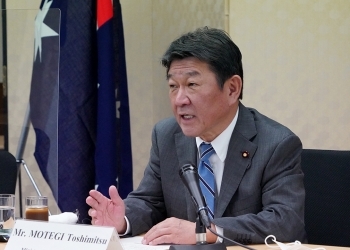 On June 9, commencing at 11 a.m. for approximately 2 hours, Mr. MOTEGI Toshimitsu, Minister for Foreign Affairs of Japan, and Mr. KISHI Nobuo, Minister of Defense of Japan, held the ninth Japan-Australia Foreign and Defence Ministerial Consultations (“2+2”) via video conference with Senator the Hon Marise Payne, Minister for Foreign Affairs of the Commonwealth of Australia, and the Hon Peter Dutton MP, Minister for Defence of the Commonwealth of Australia. The overview of the consultations is as follows. (A joint statement was issued after the consultations.)

The four Ministers shared the view to deepen cooperation between Japan and Australia, “Special Strategic Partners” which share fundamental values and strategic interests, towards realizing a “Free and Open Indo-Pacific” amid the increasingly challenging security environment in the Indo-Pacific region. The Ministers also confirmed the importance of sharing their strategic awareness considering regional security challenges, and elevating security and defence cooperation between Japan and Australia to a new level so as to contribute to the peace, stability and prosperity of the Indo-Pacific and beyond, thereby realizing a “Free and Open Indo-Pacific.”

2.
Trends in the Indo-Pacific region
3.

The four Ministers welcomed the United States’ strong commitment to the Indo-Pacific region and reaffirmed their commitment to further strengthen trilateral cooperation with the United States, a common ally, to support the peace, stability and prosperity of the region. Furthermore, the Ministers concurred on the importance of Japan-Australia-U.S. and Japan-Australia-India-U.S. coordination for realizing a “Free and Open Indo-Pacific,” and shared the view to promote cooperation with like-minded countries including Southeast Asian, European, and Pacific Island countries.