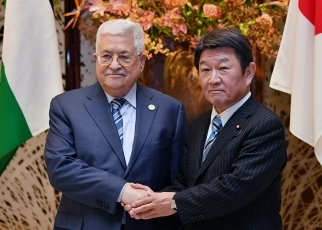 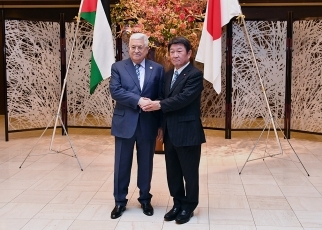 On October 21, commencing around 6:45 p.m. for approximately 60 minutes, Mr. MOTEGI Toshimitsu, Minister for Foreign Affairs of Japan, hosted a working dinner at the Iikura Guest House with H.E. Dr. Mahmoud Abbas, President of Palestine. The overview of the working dinner is as follows.

1. Japan-Palestine Relations
After welcoming President Abbas’s visit to Japan, Minister Motegi stated, “Relations between Japan and Palestine have become closer, with increasing mutual visits at the leader and minister levels in recent years. Japan will work toward further deepening these relations.”

In response, President Abbas stated that Japan is a valued friend of Palestine, and that Palestine intends to cooperate with Japan for further enhancing their relations.

2. Japan’s Basic Position and Assistance for Palestine
Minister Motegi stated that Japan’s support for a “two-state solution” remains unchanged, and expressed, “Japan will continue to be committed to confidence-building between the Israeli and the Palestinian sides, and to assisting Palestine,” and that “Japan believes that we can shed light on a pathway for peace only by ensuring that Palestinians have hopes for their future and maintain dignity.” Minister Motegi also provided an explanation of Japan’s assistance for Palestine, including assistance under the “Corridor for Peace and Prosperity” initiative, the “Conference on Cooperation among East Asian Countries for Palestinian Development (CEAPAD), and the United Nations Relief and Works Agency for Palestine Refugees in the Near East (UNRWA).

In response, President Abbas stated that Japan’s continuous assistance is highly appreciated, including the “Corridor for Peace and Prosperity” initiative.

3. Middle East Peace Process
The two sides exchanged views regarding the situation of the Middle East peace process. Minister Motegi stated, “Japan has concerns over the long absence of dialogues with the parties concerned, such as Israel and the United States,” and that “Japan intends to make confidence-building efforts toward the resumption of dialogue.”

In response, President Abbas stated that Palestine will stick to a peaceful route and that he looks forward to Japan’s increasing role.