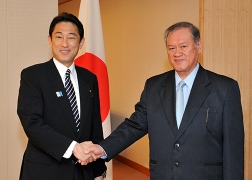 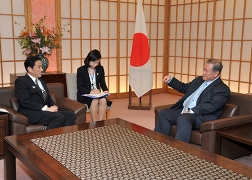 On May 10, for around 25 minutes from 5:42 P.M., Mr. Fumio Kishida, Minister for Foreign Affairs, received a courtesy call from Pehin Orang Kaya Pekerma Dewa Dato Seri Paduka Lim Jock Seng, Minister of Foreign Affairs of Trade II of Brunei Darussalam, who is visiting Japan ahead of a visit by His Majesty Haji Hassanal Bolkiah, Sultan and Yang Di-Pertuan of Brunei Darussalam and Her Majesty Paduka Seri Baginda Raja Isteri Pengiran Anak Hajah Saleha. The overview of the meeting is as follows.