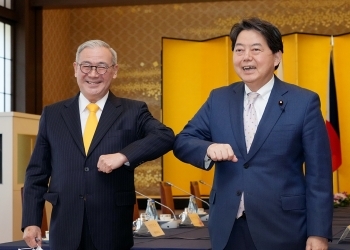 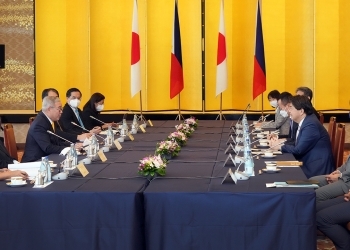 On April 9, following the first Japan-Philippines Foreign and Defense Ministerial Meeting (“2+2”), Mr. HAYASHI Yoshimasa, Minister for Foreign Affairs of Japan, met with Hon. Teodoro L. Locsin Jr., Secretary of Foreign Affairs of the Republic of the Philippines, at a Foreign Minister’s Meeting and over working lunch for about 90 minutes from 12:15 p.m. The overview of the meeting is as follows:

At the onset, Minister Hayashi welcomed the fact that the Japan-Philippines relations enjoy their “Golden Age” under the Duterte administration, and that the inaugural bilateral “2+2” was convened successfully, on top of the fulfillment of Japan’s commitment of public and private finances in five years, announced in 2017 by the two leaders. The two ministers exchanged views to further strengthen the coordination in response to regional and international issues as well as cooperation toward the realization of a “Free and Open Indo-Pacific.”

Secretary Locsin expressed his gratitude for Japan's long-standing assistance and appreciation for the harmonious bilateral economic relations in areas such as infrastructure development that enhances connectivity, response to COVID-19, and maritime cooperation, and the two ministers discussed future bilateral cooperation in these fields. The two ministers also discussed bilateral coordination in the international arena including at the United Nations.

The two ministers held a frank exchange of views on the situation in Ukraine and challenges that the Indo-Pacific region faces, following the discussion at “2+2” in the morning.