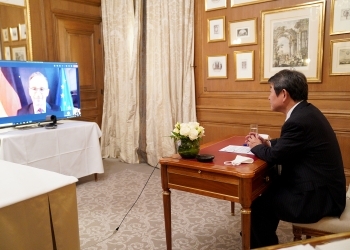 On October 1, commencing at around 5:30 p.m. (local time; 00:30 a.m. JST) for approximately 40 minutes, Mr. MOTEGI Toshimitsu, Minister for Foreign Affairs of Japan, who was visiting the French Republic, held a video teleconference meeting with H.E. Mr. Heiko Maas, Federal Minister for Foreign Affairs, Federal Republic of Germany. The overview of the meeting is as follows. (This teleconference was held at the request by Minister Maas, who is currently under home quarantine.)

1. At the outset, Minister Motegi stated: “Although we could not meet in person during my first visit to Europe following my reappointment, I am glad we can exchange views per video conference. Let us work together to give momentum to Japan-Germany relations in the lead-up to next year’s 160th anniversary of Japan-Germany relations.” In response, Minister Maas stated that it was unfortunate that he was not able to welcome Minister Motegi in Berlin and that he looked forward to holding a face-to-face discussion with Minister Motegi at an early timing.

2. The Ministers confirmed that they would work together to advance the international framework related to the COVID-19 pandemic. Regarding the relaxation of restrictions on entering Japan, Minister Motegi explained that Japan has permitted the reentry to Japan by foreign nationals with the status of residence starting from September 1, and will incrementally permit the holders of the status of residence to newly enter Japan from October 1. Minister Maas welcomed the measure.

3. Minister Motegi praised the “Policy Guidelines for the Indo-Pacific” recently released by the Government of Germany. The Ministers shared the view on strengthening Japan-Germany cooperation toward realizing a free and open Indo-Pacific.

4. The Ministers also exchanged views regarding issues related to the bilateral relationship as well as the international and regional situations such as North Korea including the abductions issue and the issues of East and South China Seas and affirmed close cooperation between the two countries at international fora including the G7.