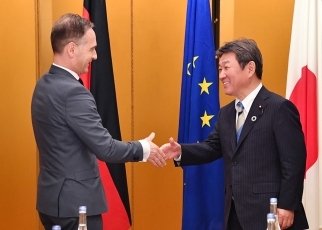 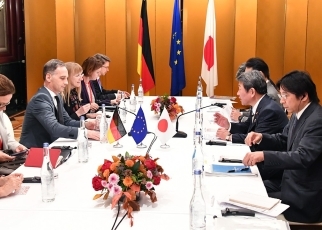 On November 23, commencing at 5:35 p.m. for approximately 20 minutes, Mr. MOTEGI Toshimitsu, Minister for Foreign Affairs of Japan, held a Foreign Ministers’ Meeting with H.E. Mr. Heiko Maas, Federal Minister for Foreign Affairs, Federal Republic of Germany, who is visiting Japan to attend the G20 Aichi-Nagoya Foreign Ministers’ Meeting. The overview of the meeting is as follows.

1. Regarding bilateral relations, Minister Motegi first welcomed the visit of Minister Maas to Japan and stated “I am grateful for the active dialogue between Japan and Germany, from the working level to the summit level, including the close coordination at the foreign-ministerial level.” In addition, Minister Motegi stated, “Japan-Germany cooperation has greatly expanded in the past years, encompassing the Indo-Pacific, the Western Balkans, the Sahel region, and capacity building for peace-keeping operations,” and “I hope to continue building up our tangible cooperation.” In response, Minister Maas said, “I am pleased with recent close cooperation between Japan and Germany and would like to continue this cooperation,” and also stated, “I hope your Excellency visits Germany at an early timing.”

2. In relations to the Ministerial Meeting of the Non-Proliferation and Disarmament Initiative held after the G20 Aichi-Nagoya Foreign Ministers’ Meeting, Minister Motegi expressed his gratitude for the visit of Minister Maas to Hiroshima and stated, “I am grateful for Germany’s cooperation leading up to the Ministerial Meeting and the Joint Ministerial Statement.” Minister Motegi also stated, “Japan intends to continue working together with Germany towards the 2020 Review Conference of the Parties to the Treaty on the Non-Proliferation of Nuclear Weapons.” In response, Minister Maas said, “It is essential to globally disseminate the story of Hiroshima and Nagasaki,” and “It is necessary to exert pressure to facilitate nuclear disarmament towards the Review Conference.” The two ministers further exchanged views on nuclear disarmament and non-proliferation issues.

3. In addition, the two ministers held an exchange of views on the situation in East Asia, including the issue of North Korea, and shared the view that, as for the North Korea’s affairs, close cooperation is essential between Japan and Germany which currently chairs the UN Security Council 1718 Sanctions Committee. Furthermore, Minister Motegi sought understanding and cooperation for the early resolution of the abductions issue.