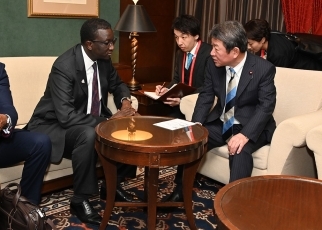 1. At the outset, Minister Motegi welcomed Minister Ba to Japan and expressed his congratulations on the successful convening of the Dakar International Forum on Peace and Security in Africa, stating that “Parliamentary Vice-Minister for Foreign Affairs Nakatani attended the Forum as a representative of Japan. I am pleased that Japan supported the holding of the Forum.” In addition, Minister Motegi referred to the 60th anniversary of the establishment of diplomatic relations between Japan and Senegal in 2020, and expressed his intention to further elevate the relations between the two countries by taking this opportunity. Furthermore, regarding Africa’s development, one of the agenda items of the G20 Aichi-Nagoya Foreign Ministers’ Meeting, Minister Motegi stated that “I would like to reaffirm the need for G20 to back up Africa’s own efforts based on the outcomes of the TICAD7.”

2. In response, Minister Ba congratulated Japan’s successful holdings of TICAD7 and G20 this year as president. In addition, he expressed his gratitude to Japan’s contribution to the Dakar International Forum. Moreover, he appreciated Japan’s development assistance in Senegal and expressed his intention to work for bolstering bilateral cooperation between Senegal and Japan in view of the 60th anniversary of the establishment of diplomatic relations between two countries next year.