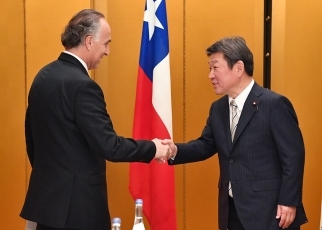 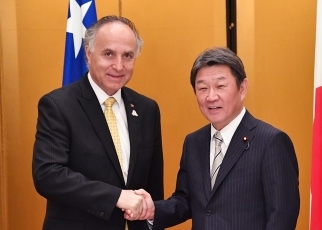 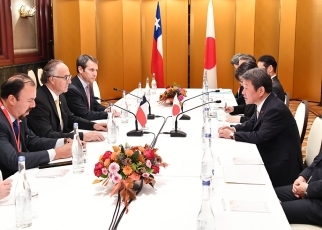 On November 22, commencing at 4:25 p.m. for approximately 20 minutes, Mr. MOTEGI Toshimitsu, Minister for Foreign Affairs of Japan, held a Foreign Ministers’ Meeting with H.E. Dr. Teodoro Ribera Neumann, Minister of Foreign Affairs of the Republic of Chile, who is visiting Japan to attend the G20 Aichi-Nagoya Foreign Ministers’ Meeting. The overview of the meeting is as follows.

1. Minister Motegi welcomed Minister Ribera to Japan and stated, “While it is regrettable that Chile’s hosting of the APEC meeting and COP25 was cancelled, I would like to express my respect to Chile’s preparations as the chair.” Regarding the situation in Chile, Minister Motegi stated, “Japan understands that Chile is making efforts to resolve the issues based on fundamental values that the two countries share, including democracy and the rule of law,” and “Japan hopes for a prompt and peaceful resolution of the situation.” In response, Minister Ribera stated, “I appreciate the invitation to attend this G20 meeting, Japan is important Strategic Partner and plays an important role in the field of democracy and free trade in the Indo Pacific Region” “I express my appreciation for Japan’s consideration of the situation in Chile. In order to meet domestic social demand, Chile had to inevitably cancel the hosting of the APEC meeting and COP25. I also ensure the safety of Japanese people and companies’ activities in Chile.”

2. Minister Motegi stated, “I would like to inform that the Government of Japan has decided to adopt a technical cooperation project for the elderly; I welcome the progress made in our bilateral cooperation.” In response, Minister Ribera stated, “Chile appreciates Japan’s decision to adopt this project. I also would like to accelerate our efforts about the driver’s license issues”

3. The Ministers exchanged views about wide range of areas, and shared the view on continuing to further strengthen their bilateral relations and cooperation in the international arena.