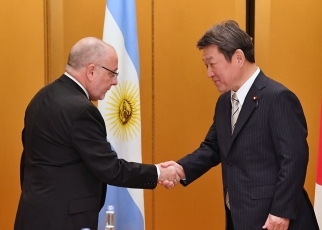 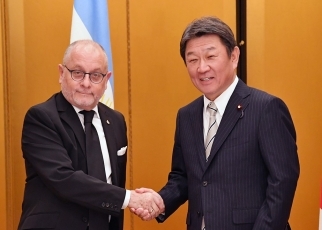 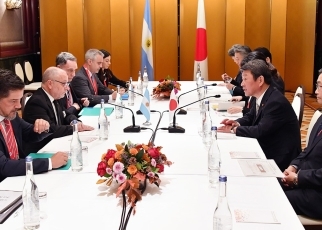 On November 22, commencing around 4 p.m. for approximately 20 minutes, Mr. MOTEGI Toshimitsu, Minister for Foreign Affairs of Japan, held a Foreign Ministers’ Meeting with H.E. Mr. Jorge Marcelo Faurie, Minister of Foreign Affairs and Worship of the Argentine Republic, who is visiting Japan to attend the G20 Aichi-Nagoya Foreign Ministers’ Meeting. The overview of the meeting is as follows.

1. Minister Motegi stated, “This year’s Rugby World Cup will be followed by a series of important events, including the 2020 Tokyo Olympic and Paralympic Games, Expo 2023 Buenos Aires, and Expo 2025 Osaka; I hope to further promote Japan-Argentina exchanges through such events.” In response, Minister Faurie stated, “As we celebrated recent years the 120th Anniversary of the Establishment of Diplomatic Relations and the 130th Anniversary of Japanese migration, Japan and Argentina have had a long friendly relationship, we would like to further strengthen bilateral relations in various fields including economic fields such as trade and investment, while cherishing the bonds established by Nikkei people.”

2. Minister Motegi stated, “Japan appreciates Argentina’s close cooperation as a member of the G20 Troika this year.” “I look forward to Argentina’s contribution to the candid discussions at tomorrow’s G20 Foreign Ministers’ Meeting and hope we can continue to promote a variety of initiatives.” In addition, Minister Motegi offered his congratulations for the election of Argentinian Ambassador Grossi as the Director General of the International Atomic Energy Agency (IAEA), stating, “Japan will render its assistance to the fullest extent to the endeavor of next Director General Grossi.” In response, Minister Faurie appreciated to the congratulations and stated “From the perspective of peaceful use of nuclear energy, Argentina intends to cooperate with IAEA, which Japan has made great contributions.”

3. The Ministers shared the view that it is important for the two countries, as strategic partners sharing universal values, to continue to sustain and strengthen their bilateral relationship and cooperation in the international arena.