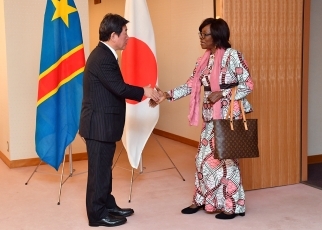 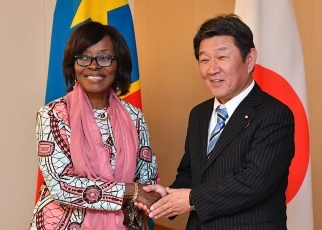 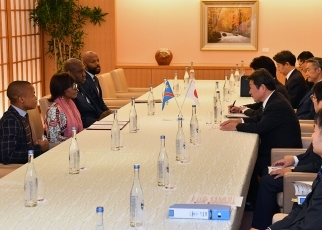 1. Opening Remarks
After welcoming the visit to Japan by Minister Tumba and congratulating her on her assumption of the office, Minister Motegi presented his condolences to a number of victims killed in a trafic accident occured on October 20 in the DRC. Minister Motegi also stated, “The peace and stability of the DRC, recognized as a country with high latent economic power, is the key for prosperity of the entire African continent. Japan, as a partner, will continue implementing development cooperation which benefits directly the Congolese people.”
In response, Minister Tumba appreciated the sympathy expressed by Minister Motegi. She also expressed her gratitude to the Government of Japan for its warm hospitality given to her current visit, as well as to the delegation of the DRC during the 7th Tokyo International Conference on African Development (TICAD7) held last August.

2. Bilateral Relations
Minister Motegi conveyed condolences about the Ebola virus disease outbreak in the DRC and stated that, “Japan is providing emergency relief goods, dispatching a Japan Disaster Relief Team, and implementing an emergency grant aid” in order to help curbing the spread of the outbreak. In addition, toward bolstering bilateral economic relations, he stated, “I am counting on your cooperation for improvement of the environment for business expansion of Japanese companies in the DRC.”
In response, Minister Tumba was thankful to the Government of Japan for its various assistance including that against the Ebola virus desease outbreak, saying that a friend in need is a friend indeed. Moreover, she responded with regard to the business environment in the DRC that the Government had been implementing measures to improve it such as the enactment of a revised Mining Act. Minister Tumba showed her expectation for further developed economic relations between Japan and the DRC.

3. Cooperation in international fora
Minister Motegi sought understanding and cooperation on the early resolution of the abductions issue, and gained support of Minister Tumba.