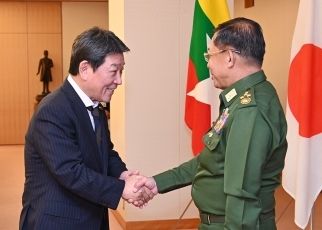 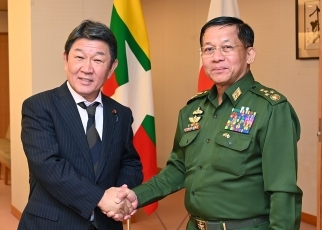 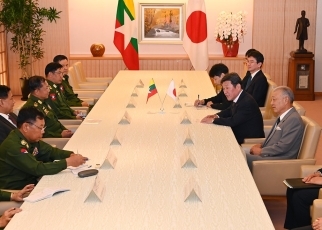 On October 9, commencing at 6:10 p.m. for approximately 20 minutes, Mr. MOTEGI Toshimitsu, Minister for Foreign Affairs of Japan, held a meeting with Senior General Min Aung Hlaing, Commander-in-Chief of the Defence Services of the Republic of the Union of Myanmar, who is visiting Japan at the invitation of the Ministry of Defense of Japan. The overview of the meeting is as follows.

1. At the outset, Minister Motegi stated, “The Government of Japan will continue to provide full-fledged support for Myanmar’s democratic nation-building, and, together with Special Envoy Sasakawa, will provide maximum support for the peace process. With regard to the Rakhine issue, Japan considers that it is essential to make swift progress in creating an environment conducive to the repatriation of displaced persons in a visible manner, with the cooperation of the United Nations, and to take appropriate measures in response to the alleged human rights violations. Japan hopes for the cooperation of the Myanmar military in these issues.”

2. Regarding the peace process in the ethnic minorities’ areas, Minister Motegi stated, “Japan hopes for the permanent ceasefire with Kachin Independence Army (KIA) and others and the repatriation and resettlement of the displaced persons. Japan’s reconstruction and development assistance in the southeastern Myanmar is making progress in collaboration with the Nippon Foundation and other Japanese NGOs. Japan hopes to obtain the full cooperation of the Myanmar military in this regard.” In response, Commander-in-Chief Min Aung Hlaing expressed appreciation for the assistance of Japan and stated, “We are cooperating with Special Envoy Sasakawa, to achieve peace and resolve the issue of internal displaced people. We desire to accomplish eternal peace.”

3. Regarding the situation of Rakhine State, Minister Motegi stated, “Japan’s position is to fully support Myanmar’s own efforts for improving the situation of Rakhine State.” Regarding the alleged human rights violations, Minister Motegi urged, “It is important that the investigation of the Independent Commission of Enquiry (ICoE) moves forward, and it is necessary that the Myanmar government and military promptly take appropriate measures based on the recommendations of the Independent Commission of Enquiry.” Commander-in-Chief Min Aung Hlaing expressed his appreciation for Japan’s understanding and assistance and stated, “Both the military and government of Myanmar are ready to accept returnees upon verification of their record of residence in Myanmar. We will also make efforts for improvement of the living conditions to which they will return.” Regarding the alleged human rights violations, he responded, “We are fully cooperating with the investigation by the ICoE and will take measures regarding those responsible for human rights violations according to the law if such violations were to be revealed.”

4. The both sides also exchanged views on the situation of North Korea and confirmed that they will cooperate towards complete denuclearization of North Korea. Minister Motegi also requested Commander-in-Chief Min Aung Hlaing’s understanding and cooperation towards the early resolution of the abductions issue and he expressed his support.