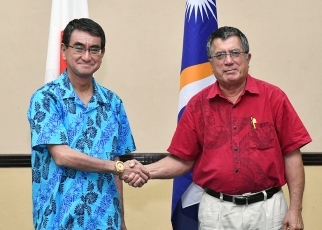 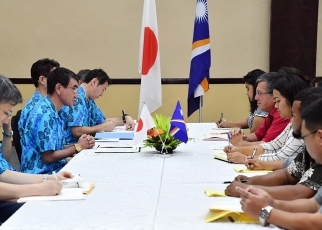 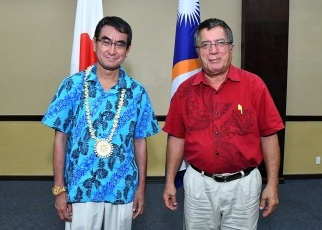 On August 8, commencing at 3:00 p.m. (local time; 0:00 p.m. JST) for approximately 40 minutes, Mr. Taro Kono, Minister for Foreign Affairs of Japan, held a meeting with Hon. John M. Silk, Minister of Foreign Affairs and Trade of the Republic of the Marshall Islands, in its capital city of Majuro. The overview of the meeting is as follows.

3. Minister Kono stated that Japan has decided to strengthen the commitment to Pacific Island countries aimed at achieving a Free and Open Indo-Pacific, and that Japan will advance new initiatives focused on the areas of maritime issues, connectivity through quality infrastructure development, climate change measures, and disaster risk reduction. Minister Kono informed Minister Silk regarding the following concrete initiatives, which were welcomed and appreciated by Minister Silk.

(1) The Ministers confirmed steady progress made in the project for building a disaster management center, financed through the U.S.$7.4 million assistance that was provided for supporting fiscal resiliency and disaster risk reduction in the Marshall Islands, which was announced in February.

(2) Minister Kono conveyed that the Government of Japan is positively considering improvement of the water reservoir at Majuro Atoll, a priority of the Marshall Islands.

(3) In the maritime issues, Minister Kono announced that Japan will provide support for measures to combat illegal fishing and for capacity building in maritime security, in coordination with the United States and other countries.

(4) To promote people-to-people exchanges among the young generation, Minister Kono announced that Japan will invite children from Pacific Island countries to the Tokyo Olympic and Paralympic Games next year.

(5) In light of requests from Pacific Island countries, the Ministers confirmed that the PALM Ministerial Interim Meeting will be held in Fiji in mid-2020. Minister Kono asked for Minister Silk’s cooperation towards a successful meeting.

(6) To promote tourism, trade and investment, the Ministers agreed on the further collaboration between both countries.

4. In addition, the Ministers confirmed cooperation on issues facing the international community, including North Korean affairs. The Ministers also confirmed close collaboration for further strengthening the historically friendly and cooperative relations between Japan and the Marshall Islands, which celebrated the 30th anniversary of diplomatic relations in 2018.