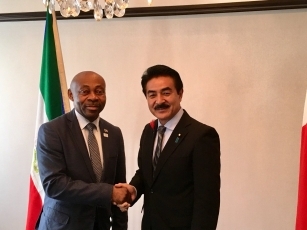 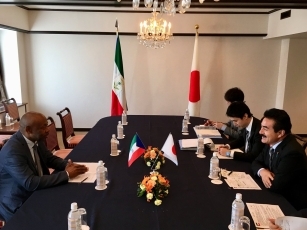 On October 7, commencing at around 10:55 a.m. for approximately 20 minutes, Mr. Masahisa Sato, State Minister for Foreign Affairs, met with Mr. Bonifacio Mitogo Bingdang, Deputy Minister for Foreign Affairs and Cooperation of the Republic of Equatorial Guinea, who visited Japan to attend the Tokyo International Conference on African Development (TICAD) Ministerial Meeting. The overview of the meeting is as follows.

1. In opening statements, State Minister Sato sincerely welcomed Deputy Minister Mitogo Bingdang’s attendance at the TICAD Ministerial Meeting. He stated that both countries have cordial relations and that Japan seeks to further advance cooperation with Equatorial Guinea, including on the international stage, given that Equatorial Guinea is currently one of the none-permanent member of the United Nations (UN) Security Council.

2. State Minister Sato also expressed his hope that human resources, who have been developed including through the African Business Education (ABE) Initiative, will act as a bridge between Japan and Equatorial Guinea in the future. In addition, he requested that initiatives continue to be taken by the Government of Equatorial Guinea to develop investment environment, in which Japanese companies are engaging.

4. In addition, the two Ministers held an exchange of views regarding cooperation in the international arena including the North Korea situation and Security Council reform.