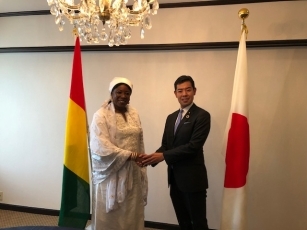 On October 6, commencing at around 4:25 p.m. for approximately 30 minutes, Mr. Kiyoto Tsuji, Parliamentary Vice-Minister for Foreign Affairs, met with Mrs. Keita Diene, Minister for Cooperation and African Integration of the Republic of Guinea, who is visiting Japan to attend the Tokyo International Conference on African Development (TICAD) Ministerial Meeting. The overview of the meeting is as follows.

2. Parliamentary Vice-Minister Tsuji also stated that Japan places importance on relations with Guinea, which has tremendous potential in such sectors as agriculture, fisheries and mining and manufacturing. Pointing out Japan’s cooperation to date, including assistance to address the Ebola crisis, he mentioned that the Japan International Cooperation Agency (JICA) had opened an office in Conakry in February this year with a view to further strengthening bilateral relations and assisting in Guinea’s development, and stated that Japan would provide food assistance for improving food security.

3. Minister Keita expressed her sincere condolences to the victims and their families of recent natural disasters in Japan. She also expressed appreciation for Japan’s assistance to Guinea, including assistance during the Ebola crisis and food assistance, and promised cooperation towards TICAD 7 next year. Minister Keita also extended an invitation to Parliamentary Vice-Minister Tsuji to visit Guinea.

4. In addition, the two Ministers held an exchange of views regarding cooperation in the international arena such as the North Korea situation including the abductions issue, as well as Security Council reform.