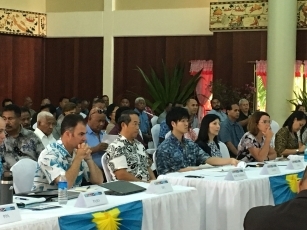 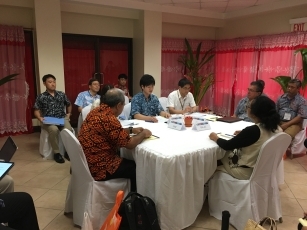 1. On 20th February (the same day at the local time), the first Japan-three Micronesian Countries’ Meeting was held at Koror, Palau. Hon. Norikazu Suzuki, Parliamentary Vice-Minister for Foreign Affairs of Japan, Hon. Faustina K. Rehuher-Marugg, Minister of State of the Republic of Palau, Hon. John M. Silk, Minister of Foreign Affairs and Trade of the Republic of the Marshall Islands and Hon. Andrew Yatilman, Secretary of Department of Environment, Climate Change & Emergency Management of the Federated States of Micronesia, attended the meeting.

2. In the beginning, Parliamentary Vice-Minister Suzuki mentioned that three Micronesian countries are neighbors of Japan in the Pacific and our special friends, bound by deep historical connections, and Japan would like to maintain and enhance this special partnership. Each country welcomed the first Japan-Three Micronesian Countries’ Meeting, and agreed to further enhance the cooperation in this framework.

3. Furthermore, Parliamentary Vice-Minister Suzuki expressed the decision to provide the total of approximately 30.7 million dollars’ new assistance in the field of disaster prevention and reduction as well as economic and social development in order to promote the stability and prosperity of three Micronesian countries. Each country expressed its gratitude towards Japan’s assistance.

4. In addition, participants confirmed the cooperation towards the issues the region faces, such as maritime security and the enhancement of connectivity as well as the stable operation of Japanese fishing vessels and the recovery of the remains of Japanese war dead.